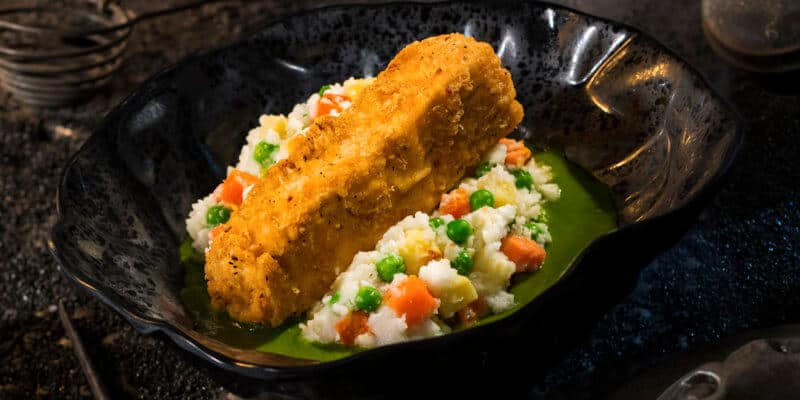 After fans from far and wide voiced their opinions regarding the removal of Star Wars -themed names from several food items in Galaxy’s Edge, Disney has decided to add the names back to the menu at a well-known theme park dining location.

Just last week on Thursday, we (and many other Star Wars: Galaxy’s Edge visitors and fans) noticed that the themed names had been removed from the lunch and dinner menu items at Docking Bay 7 Food and Cargo, the main quick service dining location at Star Wars: Galaxy’s Edge in Disney’s Hollywood Studios. These Star Wars names had been on the menu since the land opened in August, but on Thursday menu items like Braised Shaak Roast and Fried Endorian Tip-Yip became listed on the menu as Beef Pot Roast and Fried Chicken.

Keep in mind that while the themed names were removed from the Docking Bay 7 menu at the Walt Disney World location, the Disneyland location of the restaurant still boasted the same themed names that have been on the menu since the west coast’s version of Black Spire Outpost opened back in May of this year. Guests have been able to order Galaxy’s Edge menu items with themed names no problem for quite some time, although some food items differ from coast to coast.

But as of Monday of this week, Walt Disney World’s Docking Bay 7 Food and Cargo now has the original names back on the menu. And many guests believe that the adjustment could be due to the voices of several  Star Wars fans who thought that the removal of the themed names was just another way of making Galaxy’s Edge less immersive.

“This is lame…it takes away from the theming and immersion. Their was a description of the food under the name on the menu,” one Inside the Magic reader commented on our original post regarding the news.

But on the other hand, some said that the change made sense. “Most park guests aren’t there to play a game of ‘guess the $18 mystery meat,'” one reader pointed out.

No matter which side you’re on — whether you are for or against the themed names of items on this Galaxy’s Edge menu — it looks like they’re here to stay. Remember that if you’re the ultimate Star Wars fan, you can pick up themed foods at not only Docking Bay 7 Food and Cargo but also Ronto Roasters, Kat Saka’s Kettle, Oga’s Cantina, and of course the Milk Stand for that iconic blue milk.

You can take a look at the updated lunch and dinner menu for Docking Bay 7 Food and Cargo below. Note that if you didn’t notice the menu change last week, this updated menu will look the same as the restaurant’s original menu.

Want to visit Star Wars: Galaxy’s Edge for yourself? Click here for a free, no-obligation vacation quote from the Authorized Disney Vacation Planners at Academy Travel so you can have the Disney vacation of a lifetime and visit a galaxy far, far away!

What do you think of the Star Wars-themed names of food items in Galaxy’s Edge? Should Disney have stood by the decision to remove the themed names from the menu and keep the Americanized names, or are themed names with detailed descriptions the way to go? Let us know in the comments.