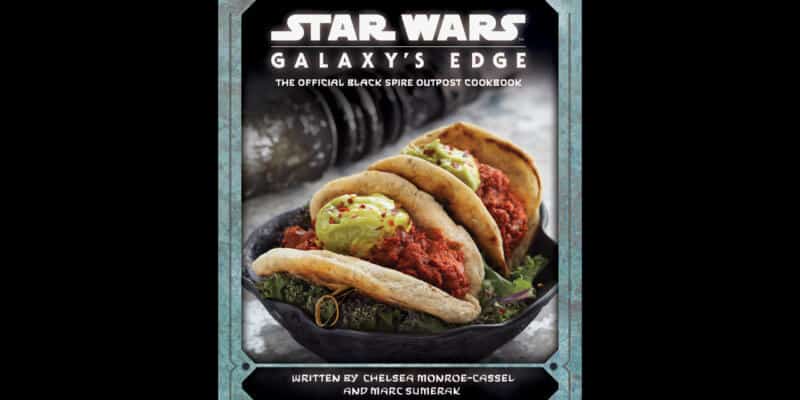 Star Wars: Galaxy’s Edge has been transporting guests at both Disneyland and Walt Disney World to otherworldly areas with their gravity-defying attractions, shops, atmosphere and restaurants. And now, you can take some of this magic home with you in your very own kitchen with this all-new cookbook featuring some of the land’s intergalactic eats.

“Star Wars: Galaxy’s Edge – The Official Black Spire Outpost Cookbook” not only features meals and treats from Star Wars: Galaxy’s Edge, but it also features other foods from beyond. The cookbook was inspired by the stories and cuisine found in the land and is written from the perspective of Strono “Cookie” Tuggs, the former head chef at Maz Kanata’s castle on Takodana.

As we’re reported in the past, Star Wars: Galaxy’s Edge offers some of the most delicious offerings in the universe! Between the land’s many themed restaurants of Docking Bay 7 – Food and Cargo, Oga’s Cantina, and Ronto Roaster, it’s hard not to get lost in all of this interstellar cuisine. With this new book, fans will finally be able to make some of these delicious creations on their own.

The book was co-written by Chelsea Monroe-Cassel and Marc Sumerak. For those not familiar with this imaginative pair, Monroe-Cassel is the coauthor of the best-seller “A Feast of Ice and Fire: The Official Game of Thrones Companion Cookbook” and author of “World of Warcraft: The Official Cookbook.” Sumerak is an Eisner and Harvey Award-nominated writer and editor. His more recent work includes “Hidden Universe Travel Guide: The Complete Marvel Cosmos” “Guardians of the Galaxy: Creating Marvel’s Spacefaring Super Heroes.”

Will you be getting a copy of this intergalactic Galaxy’s Edge cookbook to make your own space-themed dishes and treats? Let us know in the comments below!