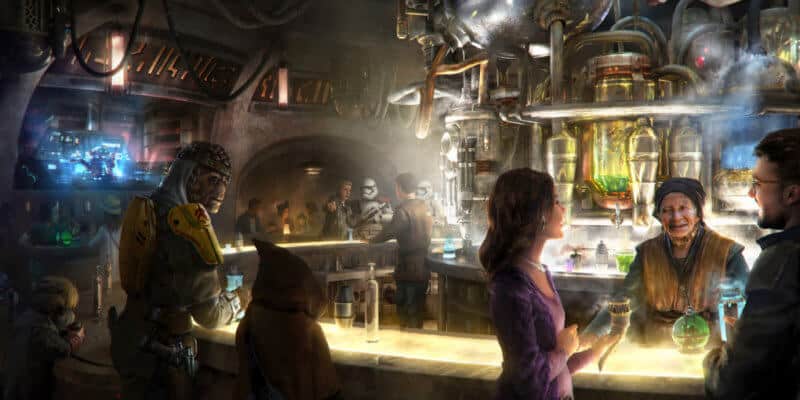 When Star Wars: Galaxy’s Edge opens in only a few months, guests to the Disney Parks will be transported to another galaxy, where they’ll get to experience a mission on the Millennium Falcon and eat intergalactic food offerings. And one other exciting experience found in the new land is Oga’s Cantina, where guests can enjoy interstellar cocktails and otherworldly tunes spun by a droid DJ! Here is a look at the upcoming attraction.

When we first learned of this exciting bar coming to Star Wars: Galaxy’s Edge, Disney revealed that this notorious watering hold would be a space to unwind, conduct shady business, and maybe even encounter a friend…or foe. But besides this release by Disney, not much other information was revealed. However, OC Register reporter Brady MacDonald was recently invited to the land where he got a special look at this unruly intergalactic joint and he shared some of the exciting discoveries he made from his journey.

“Every self-respecting spaceport has a cantina,” said Walt Disney Imagineering portfolio creative executive Scott Trowbridge. “This is the best place on the outpost to catch up on the gossip, to meet some interesting characters, maybe make a new friend, maybe make a new enemy.”

On MacDonald’s visit to the land, he reported seeing work crews busy installing an animatronic droid DJ in the libation station, which when finished, he says will be “a cozy cocktail lounge filled with massive glass canisters above the bar filled with alien creatures marinating in intergalactic potations.”

The bar will feature an alcoholic drink menu featuring a Jedi Mind Trick cocktail, Bad Motivator IPA beer, and Imperial Red Wine. The location will also include a non-alcoholic Blue Milk served with the perfect sweet chaser, a Bantha cookie.

Oga’s was designed to be reminiscent of the cantina in the original 1977 “Star Wars” movie while still retaining its own unique character, said Imagineering executive creative director Chris Beatty.

“If you think about ‘Star Wars’ films, they almost always have a great cantina as part of their experience,” Beatty said. “So we’ve seen the one on Mos Eisley, which had the Modal Nodes playing over in the corner. We’ve seen the one at Maz’s Castle. We got to see one in ‘Solo’ where Han and Chewie first met Lando Calrissian. So, of course, our planet has to have a local watering hole.”

MacDonald reports that those who visit Star Wars: Galaxy’s Edge can choose to have a “persistent interaction” with characters throughout Galaxy’s Edge. However, be warned, as your reputation will follow you throughout Black Spire Outpost. So those who are known as a Resistance pilot may receive different interactions with these characters than that of a First Order Loyalist. You never know if space pirate Hondo Ohnaka might be waiting for you in a shadowy corner of the cantina when you walk in.

“You go in the cantina and you order a drink and you know what, that bartender’s going to be like, “Ooh, you might owe some credits to Hondo at this point,” said Imagineering executive creative director Wendy Anderson.

According to MacDonald, Imagineering and Lucasfilm have been seeding Star Wars movies, novels and comic books with references to Batuu, Black Spire Outpost and Oga’s Cantina.

“We want to give the impression that this planet has always been around,” said Imagineering managing story editor Margaret Kerrison. “We’re coming into it as travelers for the first time onto Batuu. There are layers and layers of history and all these familiar and new characters who have come and gone to this planet.”

One book featuring one of these seeds from Imagineering and Lucasfilm includes “Thrawn: Alliances,” by Timothy Zahn. In the book, Padme Amidala walks into a Black Spire cantina and orders a drink.

“We know what Padme ordered at the cantina,” Kerrison said. “And guess what, that Andoan white wine is also served in our cantina.”

According to the backstory created for the cocktail bar by Disney, the cantina’s proprietor will be Oga Garra, a local crime boss who controls the underworld in Black Spire Outpost. And according to an Imagineering creative producer, Oga will have a fairly active role in the bar.

“You may never see her because she likes to lurk in the shadows, but she has her hand in every single business,” said Imagineering creative producer Brian Loo. “The locals all know her. They all fear her. They have legends all about her. Some have seen her, some haven’t. But everyone knows that you don’t cross her, otherwise you may never be seen again.”

In earlier reports of the bar’s interior, it was stated that the cantina would not include seating, which MacDonald has also confirmed from his visit. “Inside the intimate cantina, a curved bar stands at the center of a domed space with alcoves around the edges. Patrons will stand up at the bar which will have no seats.”

However, for those worried they won’t enjoy the bar due to its lack of seating, fear not, because this bar will feature some pretty cool sights that will take your mind off of your sore legs.

The tables will be up-lit to look mysterious and “bartenders will make cocktails that appear to be pumped from tanks suspended above the bar that are seemingly filled with alien creatures,” says MacDonald.

“The bar, when it’s done, is filled with all kinds of containers and different apparatus that have creatures in them that have come to life that are being used as garnishes for drinks,” Beatty said during the tour. “They’ll have amazing taps and different things that will bring the bar to life for our bartenders to activate this space.”

Since guests will be standing in the area, it will keep them free to dance, which will be easy since DJ R-3X will be manning a disc jockey console in one of the cantina’s alcoves. MacDonald reports that the former droid pilot from the Star Tours attraction will spin an alien soundtrack that Beatty described as Jawa meets new age meets 1980s pop.

“The music is fantastic,” Beatty said. “It’s a weird sound, but it’s going to be so much fun.”

MacDonald reports that the Imagineering music team worked with musicians and composers from around the world to come up with the cantina’s otherworldly soundtrack.

Oga’s Cantina will open with Star Wars: Galaxy’s Edge when the new land opens at Disneyland May 31 and at Disney’s Hollywood Studios August 29.

Are you excited to experience Oga’s Cantina when it opens at Star Wars: Galaxy’s Edge? Let us know in the comments below!