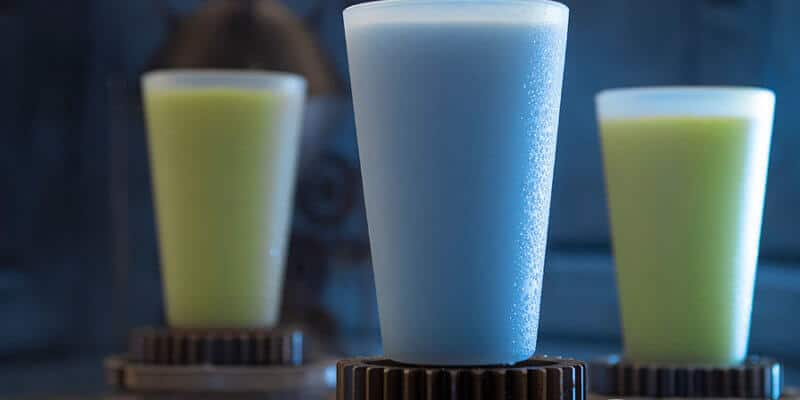 Star Wars: Galaxy’s Edge will be the largest single-themed land expansion at both Disneyland park and Disney’s Hollywood Studios when they open this summer and fall, respectively. While the land is epic in size, every detail in the land has been designed to have an authentic “Star Wars” feel, especially its food and beverage offerings.

Disney shared details on some of the galactic food and beverages coming to Star Wars: Galaxy’s Edge during a recent press event, and not only do the offerings look otherworldly, but also delicious! These new items will be found at various locations spread throughout the 14-acre land. Take a look at some of these new offerings to come below.

At Oga’s Cantina, even the blaster-bolt scorches on the walls tell a story. Here, guests will gather to share their tales from around the galaxy as they enjoy exotic beverages served in unique vessels and listen to spirited musical entertainment provided by DJ R- 3X, otherwise known as Rex, the former Starspeeder 3000 pilot droid from the original Star Tours. Rex re-invents himself as the cantina’s DJ, and he’s as quirky and talkative as ever.

According to io9, Disney also worked with breweries and winemakers to create beer and wine that will only be available in Oga’s Cantina in Star Wars: Galaxy’s Edge. Beverages include Bad Motivator IPA, White Wampa Ale, Spiced Rutter Cider, Imperial Red Cab Sav, and Toniray White from Alderaan.

A multi-purpose transport shuttle docked on top of a large hangar will beckon guests into Docking Bay 7 Food and Cargo, a designated location for traveling food shuttles. Chef Strono “Cookie” Tuggs is in much demand for his culinary skills, so he moves from site to site in a modified Sienar-Chall Utilipede-Transport that becomes a mobile kitchen and restaurant. His travels across the galaxy allow him to fill his pantry with exotic ingredients he uses to make new and unusual dishes. He is proud to present Tuggs’ Grub, a “traveling diner for diners traveling,” inspired by dishes he created during his time working for Maz Kanata on Takodana.

As Walt Disney World’s culinary director Brian Piasecki told io9, “If it looks like one thing and maybe tastes like something else? That could be really cool. The flavors in Galaxy’s Edge and Docking Bay 7 are going to be very bold,” he said.

In the Black Spire Outpost market, Ronto Roasters will draw attention from passersby with its large podracing engine firing up a barbecue pit for mouth-watering Ronto sandwiches. When hungry customers queue up to order, they will encounter a former smelter droid, carefully turning the spit of meats. Guests will also be able to choose from a variety of exotic non-alcoholic drinks like the Sour Sarlacc or Tatooine Sunset.

Non-alcoholic offerings from Ronto Roasters include the Sour Sarlaac or Tatooine Sunset.

Elsewhere in the market, the Milk Stand will offer two local favorites – blue milk and green milk. Blue milk was first seen in “Star Wars: Episode IV – A New Hope” when Luke Skywalker sat down for a family meal. Green milk was introduced in “Star Wars: Episode VIII – The Last Jedi” when Luke lived on the planet Ahch-To. Now, thirsty guests will be able to order these colorful drinks as they live their own Star Wars adventures.

The ingredients for the milk came about four years ago when the team visited Lucasfilm to get ideas. According to Michele Gendreau, Food & Beverage Director, Disneyland Resort; Brian Koziol, Food & Beverage Concept Development Director, Walt Disney World Resort; and Brian Piasecki, Culinary Director, Concept Development, Walt Disney World Resort. Lucasfilm’s response: “You get to write the story.” After brainstorming what a bantha might consume in order to produce blue milk, for example, they landed on a plant-based dairy drink, allowing more guests to enjoy it. What do they taste like? As io9 reports, the blue milk is similar to a frozen smoothie with berry and melon flavors. The green version is also frozen and features tropical flavors.

At Star Wars: Galaxy’s Edge, guests will get to walk through a bustling street market, where vendors will offer various local delicacies, including an Outpost Mix of uniquely flavored sweet, savory, and spicy popcorn from Kat Saka’s Kettle.

Will you be visiting Star Wars: Galaxy’s Edge this Summer at Disneyland Resort to try out the food? Let us know in the comments below.

If you are taking a trip to Galaxy’s Edge let Academy Travel take care of the planning details. Get a quote here for the vacation of a lifetime.