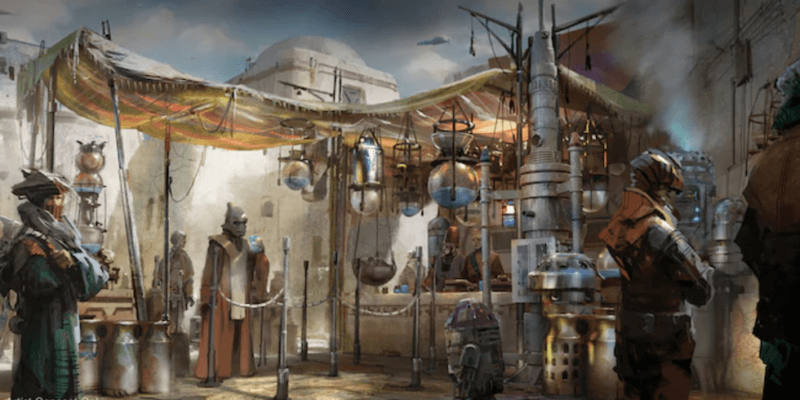 The opening of Star Wars: Galaxy’s Edge inches closer daily and as the premiere dates for the intergalactic lands at Disneyland and Walt Disney World approaches, Disney has decided to give us a new glimpse into the upcoming lands on the official Disneyland website. Specifically, at the Milk Stand, the interior of Docking Bay 7 Food and Cargo, Creature Stall, and a look at the layout for the Galaxy’s Edge integration coming to the Play Disney Parks mobile app.

Starting with a specialty that’s famous throughout the galaxy, here’s a look at the Milk Stand.

Here is a look at the exotic shop where guests can discover some of the galaxy’s rarest species, the Creature Stall.

Here guests will get to peek into cages and crates filled with intergalactic fuzz balls from all over the galaxy. This new stall will be run by Bina, the stall’s proprietor, who keeps the storefront stocked with unique companions for her customers.

One creature guests will get to encounter here includes the Kowakian monkey-lizards, a rambunctious pet most popular with shadowy underworld figures.

Even the galaxy’s toughest travelers need to stop from time to time to get their grub on, which they can do at Docking Bay 7 Food and Cargo.

Housed in a working hangar bay, here is where guests can choose from a variety of dishes prepared with ingredients found across the galaxy. Chef Strono “Cookie” Tuggs docked a food freighter loaded with fresh supplies and he’s ready to satisfy the appetites of visitors and locals alike with his exotic offerings.

As part of the experience of the restaurant, once guests grab their food, they can sit and enjoy the “space”-ious atmosphere inside a hangar, or they can grab a table in the rustic outdoor seating area surrounded by the crumbling walls of the old marketplace. Take a look at the menu for this new restaurant here.

One last new glimpse we got into Star Wars: Galaxy’s Edge from the Disneyland website was a look at the new land’s integration into the Play Disney Parks mobile app. In this new image below, we can see the new user interface one can expect when launching the app in the new land.

Disney says after guests arrive in Batuu, their phones will transform into a galactic datapad—designed to guide guests deeper and deeper into an adventure in a galaxy far, far away.

Some of the many ways guests can use the Play Disney Parks app while in the land include:

As the app guides you along, you’ll have the chance to pledge your loyalty to the First Order, support the Resistance, or strike out on your own as a scoundrel. And with each job you complete, you’ll receive digital rewards like ship schematics, star maps, galactic credits and more!

Are you excited to see these new attractions first hand when Star Wars: Galaxy’s Edge opens at Disneyland May 31 and at Walt Disney World August 29? Let us know in the comments below!