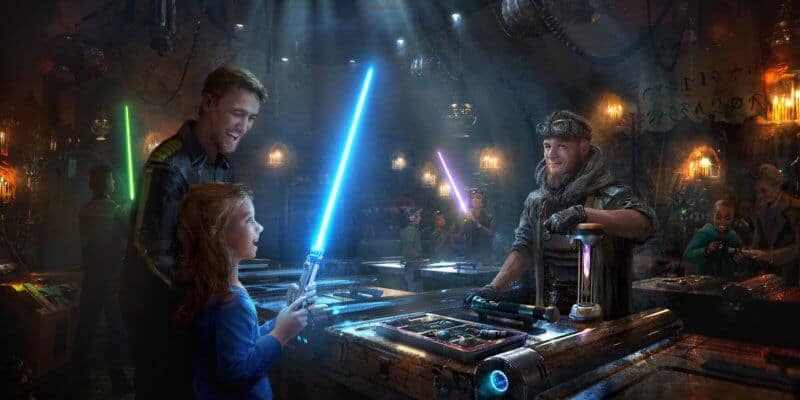 When Star Wars: Galaxy’s Edge opens in only a few months, guests to the Disney Parks will be transported to another galaxy, where they’ll get to experience a mission on the Millennium Falcon, eat intergalactic food offerings. take part in a droid building experience at Droid Depot, and build their very own lightsaber to fight their way through the galaxy! Here is a step-by-step preview of the new experience to come.

As part of this new build-your-own lightsaber experience, guests to Star Wars: Galaxy’s edge will get to work in Savi’s Workshop, where they’ll build their very own version of the infamous weapon from the Star Wars films using scavenged parts from fallen Jedi temples. According to OC Register, this workshop will be covert, hidden away from the First Order.

OC Register reports the hand-built lightsaber workshop will be run by Savi, who owns a space junkyard near the main entrance to Black Spire Outpost. This infamous scrapper has been collecting lightsaber pieces from throughout the galaxy in the hope a true hero with the ability to assemble the parts would one day enter his shop.

Galaxy’s Edge will be set in the current trilogy of “Star Wars” films when Jedi Knights are in decline. And as a result, Savi keeps the lightsaber-building shop a secret, avoiding detection by villainous First Order who are bent on destroying the heroic Jedi Order.

OC Register reports the experience will be led by the Gatherers in the Chamber of the Guardians. “Our guests will get to meet the Gatherers who have dedicated their life to balancing The Force by sharing their knowledge of it,” said Walt Disney Imagineering creative producer Brian Loo. “In this experience, our guests will go on a guided tour with the Gatherers to build their lightsaber on their journey.”

After guests check in, they’ll meet the shop’s proprietor, says Walt Disney Imagineering executive creative director Chris Beatty. “Savi’s going to come out and greet you and then bring you into the shop,” Beatty said.

The experience will be hosted in small groups, who will take part in the 20-minute attraction in the Chamber of the Guardians.

“It’s a very intimate experience,” Beatty said. “You’re in there with only 14 builders and your family.”

It’s been reported that the personalized lightsabers will have metal hilts and light-up blades. Kyber crystals added to the hilts will determine the color of the blade. The Jedi weapons will make contact sounds and powering up and down noises, just like the lightsabers do in the “Star Wars” films.

Builders will get to choose from four lightsaber styles:

OC Register reports that based on the first two choices, the builder will get a set of lightsaber pieces salvaged from fallen Jedi temples and crashed starships that can be combined to create a custom lightsaber.

Special effects will add elements of mystery and wonder to the lightsaber-building experience.

“It has some great moments of magic,” Beatty said. “The finale is super, super cool. In the reveal at the end you’ll be visited by an old friend as part of the experience.”

Guests who don’t want to take part in the premium build-your-own lightsaber experience can also purchase pre-built “legacy” lightsabers associated with “Star Wars” characters like Shaak Ti and Ahsoka Tano, which will be sold at Dok-Ondar’s Den of Antiquities in Black Spire Outpost.

As part of the design of these lightsabers, guests will be able to detach the reinforced plastic blades from the handle-like hilts to be stored while experiencing the land’s attractions. The hilts can be attached to waistband belt clips that will be sold in Galaxy’s Edge.

Savi’s Workshop and its build-your-own lightsaber experience will be found in Star Wars: Galaxy’s Edge at both Walt Disney World and Disneyland.

Are you excited to experience personalized lightsaber building when it opens in Star Wars: Galaxy’s Edge? Let us know in the comments below!

Comments Off on Inside the build-your-own lightsaber experience at Star Wars: Galaxy’s Edge