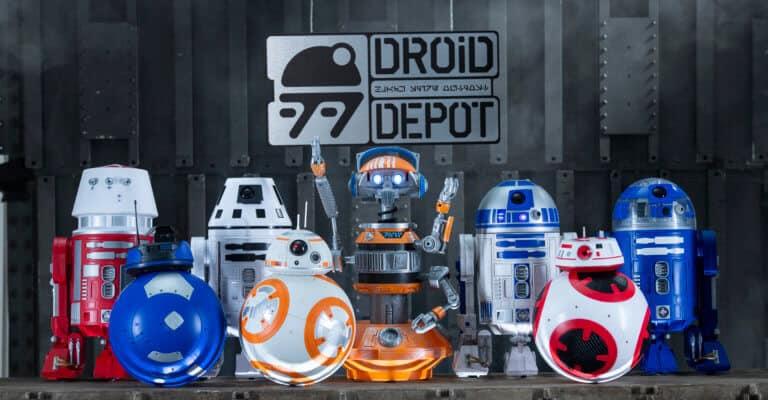 When Star Wars: Galaxy’s Edge opens in only a few months, guests to the Disney Parks will be transported to another galaxy, where they’ll get to experience a mission on the Millennium Falcon and eat intergalactic food offerings. And one other exciting experience found in the new land that will end with a take-home souvenir is at Droid Depot, where guests will be able to build their very own R2-D2 or BB-8! Here is a step-by-step preview of the new experience to come.

According to OC Register, Droid Depot will be run by a Utai proprietor named Mubo, a short, stubby alien creature with distended eyes. Outside of the shop, guests will find audio-animatronic droids who will interact with visitors.

“It’s kind of reminiscent of the droids in ‘Episode IV’ outside the sandcrawler that were for sale,” Walt Disney Imagineering executive creative director Chris Beatty told OC Register during a tour of the shop. “These will look like droids that are for sale. You can come up and get your picture with them.”

The interactive experience at Droid Depot doesn’t stop here. Located behind the shop is another animatronic droid scene set up in an intimate courtyard.

“It’s just going to be stacked with droid pieces and parts,” Beatty said. “There are two animated droids back there. They will be getting an oil bath. They’re getting a little bit of refurbishment.”

Once inside the shop, fans will get to explore the props and animated show elements found lining the walls and hanging from the ceiling.

“This shop will be polluted with droids that are full size,” Beatty said. “The whole back wall here is filled with astromechs and BB units. There’s an Imperial droid in here. There’s a medical droid. If you’re a fan of Star Wars droids, there’s a droid from almost every one of the franchise films. It’s going to be just chock full of fun characters that you know and love.” 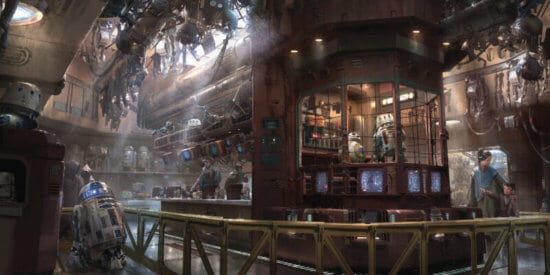 Other scenes to take in inside the shop include BB-8 sitting on an elevated platform with R5-D4, the red droid with a bad motivator that Luke Skywalker’s Uncle Owen almost purchases on Tatooine. R2-D2 can be seen near the horseshoe-shaped build station.

Droids will line the shelves along the walls in various states of disrepair. Overhead, beneath a skyline, protocol droid parts will move along a dry learner-like conveyer system.

Inside the build experience:

OC Register reports that builders can choose to make one of two models in the build-your-own droid experience: An R-series astromech droid like R2-D2 or a ball-shaped BB-series unit similar to BB-8.

“There’s a conveyor belt here running against the back wall,” Beatty said. “You pick up your droid parts, walk over to one of the build stations and assemble your droid.”

Builders will be given a mechanical screwdriver to assemble the droid parts. In an information guide, guests will find the build steps for the droid of their choosing with the option of customization of the droid panels and pieces.

Builders will be given the chance to select a personality circuit at the chip station. Each droid’s personality can be changed in just a few seconds by switching out the chips.

“When you’re done, there will be an activation station that you will plug your droid into to power it up,” Beatty said. “It does a diagnostic check and then your droid will be brought to life for the very first time.”

According to Beatty, the droid-building experience will be different for each builder. “We expect some people to come in and they’re like, ‘I know exactly what I want my droid to look like,’” Beatty said. “They’re going to pick their parts and go over and build. Be really great at building it, bring it to life and walk out.”

But there’s no time limit. You can take as long as you want to build your personalized droid.

“We’ll have other guests that may come in and go, ‘You know what I really want? I want to play a little bit. Change the head a couple of different times. Really create something crazy and wild,’” Beatty said.

After you’re finished, your remote-controlled mini-droid will communicate with full-sized units found throughout the land. Beaconing technology will allow the custom-built droids to interact with and react to signals in Disneyland’s “Star Wars” village.

“That droid that you just constructed, that droid’s your new friend,” said Disney World merchandise strategy director Brad Schoeneberg. “It knows a lot about Black Spire Outpost. It can sense the land and understands encounters that you are experiencing. In the land, your droid will be able to react to many of the same experiences that you are having.”

Also found at Droid Depot will be pre-built droids and collectibles made from droid parts.

Droid Depot and its droid building experience will be found in Star Wars: Galaxy’s Edge at both Walt Disney World and Disneyland.

Are you excited to experience Droid Depot when it opens in Star Wars: Galaxy’s Edge? Let us know in the comments below!

Comments Off on Inside Droid Depot’s droid-building experience at Star Wars: Galaxy’s Edge