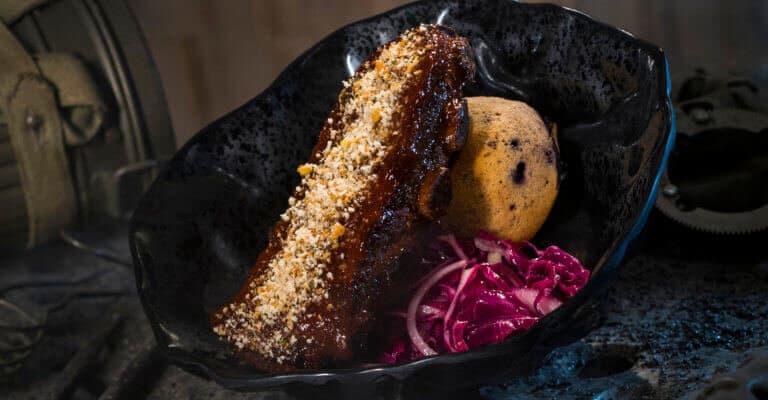 The change was first noticed on the online menu for Docking Bay 7 Food and Cargo on the Walt Disney World Resort website on Thursday. Items that Disney World guests previously knew as Braised Shaak Roast and Fried Endorian Tip-Yip are now called typical Americanized names: Beef Pot Roast and Fried Chicken. The menu change has only affected the lunch and dinner entrees so far — desserts, drinks, and breakfast items still have their Star Wars names.

Back when the menu was originally announced, many Star Wars fans enjoyed seeing the themed menu items, since they can add to the immersive quality of the land. But with Walt Disney World‘s high volume of tourists from all around the world — and with many Disney guests who aren’t too comfortable venturing out of their comfort zones when it comes to food — it’s understandable for a Star Wars menu with things like Kaadu Ribs and Yobshrimp to seem a little out-of-this-world.

Below is the updated menu for Docking Bay 7 Food and Cargo at Walt Disney World’s Galaxy’s Edge. Note that the menu items have not changed; just their names.

Interestingly, this change has not yet affected the menu of at the Disneyland location of Docking Bay 7 Food and Cargo. We’re not sure if Disney also plans to change the menu of the restaurant at Batuu West so that the item names match those of the Batuu East location. But since the lands already present slight differences, we wouldn’t be surprised if Star Wars-themed names were another difference we could add to the list.

Want to visit Star Wars: Galaxy’s Edge for yourself? Click here for a free, no-obligation vacation quote from the Authorized Disney Vacation Planners at Academy Travel so you can have the Disney vacation of a lifetime and visit a galaxy far, far away!