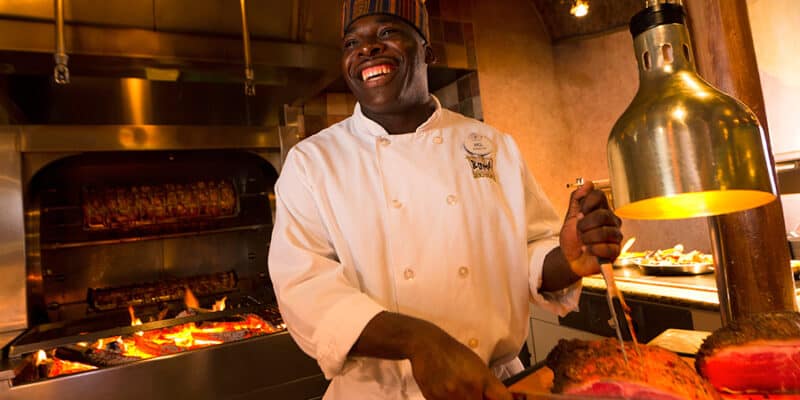 In exciting Disney World dining news, it was announced that the popular buffet dining spot Boma – Flavors of Africa at Disney’s Animal Kingdom Lodge would be opening on August 20. The African-inspired eatery has been closed since the theme parks reopened last summer. While Boma will resume buffet dining for both breakfast and dinner, the menu may vary slightly from day to day.

Boma has released menus for both its breakfast and dinner buffets, but says that both menus are only “partial listings”. African cuisine is known for its many flavorful spreads, dips, and stews — many of which are missing from the updated menus. Since the menu is only partial, it is possible that the main changes to the daily menu will be those spreads and soups.

You can take a look at Boma’s partial breakfast and dinner buffet menus below.

Boma is also not listing its dessert buffet offerings. While it has not been confirmed that there will be a dessert buffet, it is possible that the offerings will change on a daily basis.

Here is some more information on the delicious dining location from the Walt Disney World website:

At dinner, watch chefs prepare Oak roasted meats, vegetarian specialties, coastal seafood dishes, fresh salads and house-baked pastries in the onstage kitchen. Kids can enjoy options like chicken nuggets, while Guests 21 years of age and up delight in unique South African wines—many of which are available by the glass.

Reservations at Boma are not required, but are highly recommended. Guests can make their Disney World dining reservations 60 days in advance.

Will you be making a reservation to eat at Boma when it reopens on August 20? How do you feel about the menu changes? Let us know in the comments!

CLICK HERE to book your food-filled Walt Disney World vacation with our friends at Academy Travel – an EarMarked Diamond travel agency that can provide you with a free quote today!