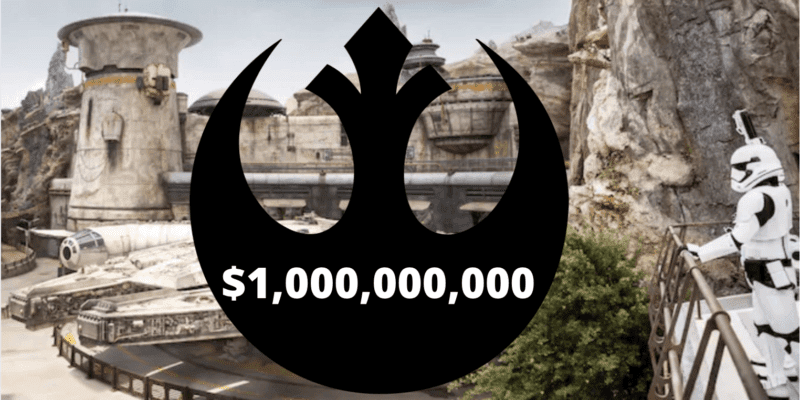 The 2019 edition of the Themed Entertainment Association’s theme park attendance report released this week, with a few somewhat surprising statistics.

While the flat attendance numbers might make it seem like the billion dollar Galaxy’s Edge project at Disneyland was a bust, the huge expansion was actually still worthwhile.

Here, we tackle the top 3 reasons Star Wars: Galaxy’s Edge was still worth the billion bucks The Walt Disney Company spent on developing it in California.

1. Disney may have designed it that way.

Disney’s goal, particularly at its original California theme park, is to maintain a comfortable atmosphere for Guests. Since Disneyland Resort is smaller overall than Disney World, it often attracts more locals and has a more “chill” feel overall.

Because The Walt Disney Company never makes any decision by chance, it’s very possible that flat Galaxy’s Edge attendance is exactly what they had in mind.

As the Orange County Register pointed out:

The two chief knocks on Disneyland that get delivered repeatedly like a one-two punch are that the park is too crowded and tickets are too expensive.

Headlines proclaiming flat attendance at Disneyland in 2019 help combat the perception of a crowding problem. An extra 14 acres carved out of backstage space for Galaxy’s Edge also increases the footprint of Disneyland — meaning more room for visitors and a less crowded park.

It is worth noting that Disneyland Park attracted huge crowds when the much-touted Rise of the Resistance attraction opened six months after the grand opening of Galaxy’s Edge.

When travelers descend on Batuu at Disneyland Resort, they are met with a host of ways to spend money (credits, to Batuuvians).

From building a custom lightsaber (complete with kyber crystal) at Savi’s Workshop ($200) to constructing one-of-a-kind droid units at the Droid Depot ($99) to a Bubo Wamba Family Farms Light-Up Souvenir Sipper filled with blue milk or green milk ($24.99), there’s no shortage of ways to get rid of your Batuu credits.

On a call with financial analysts, Walt Disney Company Chairman Bob Iger noted, “Those two lands have been far more successful than been reported.”

As a matter of fact, according to an OC Register report, overall revenue and per-capita spending for Disney’s U.S. theme parks has increased since the opening of Star Wars: Galaxy’s Edge, even though park attendance has remained static.

Disney loves to play the long game. While Disney theme parks have long offered something for everyone, not everyone realized this. When they opened the gates to Batuu, they automatically engaged a new type of Disney Parks visitor who will now continue returning to Disneyland for years to come.

Suddenly, castles, princesses, and Mickey Mouse weren’t the only thing the average American/non-Disney person thought of when the words “Disney World” or “Disneyland” were mentioned.

Star Wars fans have now been fully integrated into the Disney family, even if they aren’t necessarily into other franchises, such as the Disney Princesses, that fall under the The Walt Disney Company umbrella.

Furthermore, technology enthusiasts want to visit Galaxy’s Edge just to see how its two incredible attractions, Star Wars: Rise of the Resistance and Millennium Falcon: Smuggler’s Run, operate. Both of these Disney rides utilize amazing technological advancements to give Guests the ride of a lifetime.

What do you think? Was Galaxy’s Edge worth the money spent to build it?

If you’re ready to visit the Disney park Star Wars land for yourself, contact the experts at Academy Travel to help you with every detail of your trip to Star Wars Galaxy’s Edge, including how to get a coveted boarding group for Rise of the Resistance or a droid or lightsaber building reservation!