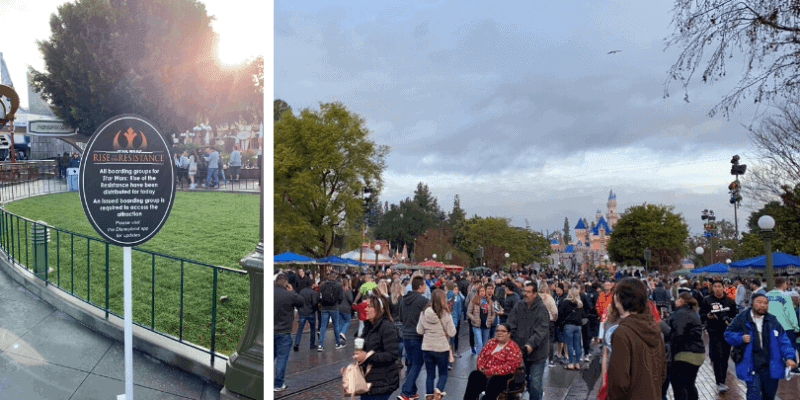 Star Wars: Rise of the Resistance opened today in Star Wars: Galaxy’s Edge at the Disneyland resort in California to an unprecedented crowd with the virtual queue filling up in less than 5 minutes.

Here’s the breakdown of events:

Related: Star Wars: Rise of the Resistance – A Disneyland Attraction We Never Knew We Needed

Cast Members on hand told Inside the Magic that Disneyland began letting people in so early because they had to make room outside. After around 5:30 a.m, the gathering crowd was so large, they were pushed back all the way to the entrance to Disney’s California Adventure, and there needs to be a clear walkway in the Disneyland Esplanade, the courtyard space between the two parks.

A Line for Coffee that Could Cover a City Block

Even though the rides remained closed, the shops on Main Street, U.S.A. began to open, allowing guests to pass the time and get a little breakfast. But Main Street’s Starbucks — called Market House — was the biggest hit. At one point, the line stretched from the around coffee shop all the way down to the Silhouette Studio that stands across the street from Main Street’s Penny Arcade. That is close to the equivalent distance of a city block. But who can blame them? After all, if these people were awake and moving before 5:00 a.m. this morning, they’re going to need some coffee, right?

The crowd on Main Street continued to grow and grow until it was too much for the park. Disneyland caved and opened the park at 7:45 a.m., 15 minutes early. However, Cast Members clarified that this was a move to simply alleviate and disperse the overwhelming crowd that had gathered on Main Street. The virtual queue still would not start until 8:00 a.m. This also allowed guests who were relying on the paper Boarding Group distribution areas (instead of the Disneyland app) to join the virtual queue.

Rise of the Resistance Virtual Queue Filled in 1 Minute!

The clock struck 8, and thousands of guests took to their phones! Guests heard cheers echoed across the park. Like a deerless hunter hearing rifle fire echo from other corners of the forest, the cheers were tell-tale signs that someone was a little luckier than you on this opening day.

By 8:01 a.m. PST, every regular boarding group was filled. By 8:02 am, guests were being placed in “Backup Groups,” and over 100 total groups were filled. Backup groups are like waiting stand-by at the airport. You have the chance at a seat, but only after everyone in the regular boarding groups has already been seated and through.

While it still isn’t surprising that the boarding groups filled up so quickly, Inside the Magic learned that there were two kiosks with Cast Members distributing paper boarding group reminders for guests who don’t have the Disneyland app or a smart phone. One is by Buzz Lightyear Astro Blasters in Tomorrowland, and the other by Splash Mountain in Critter Country.

This was done probably to help disperse the crowds across Disneyland Park and also to ensure the WiFi and Disneyland App didn’t get overwhelmed and crash, and also so that guests without smart phone could still have the opportunity to join a group. Regardless, every single available boarding pass was accounted for in mere minutes.

As we learned at Disney’s Hollywood Studios in Florida, there is no standby line for Rise of the Resistance. You need to join the virtual queue and join a boarding group. But unlike a Fastpass“>Fastpass, you can’t join a boarding group until the park opens on the day you want to ride it, and you have to be in the park to join a group. So, we wholeheartedly suggest crossing the threshold into Disneyland Park well before official opening if you want a shot at a boarding group.

Have you visited Star Wars: Galaxy’s Edge at Disneyland lately? Do you think “Rise of the Resistance” is worth the hype? Let us know in the comments!