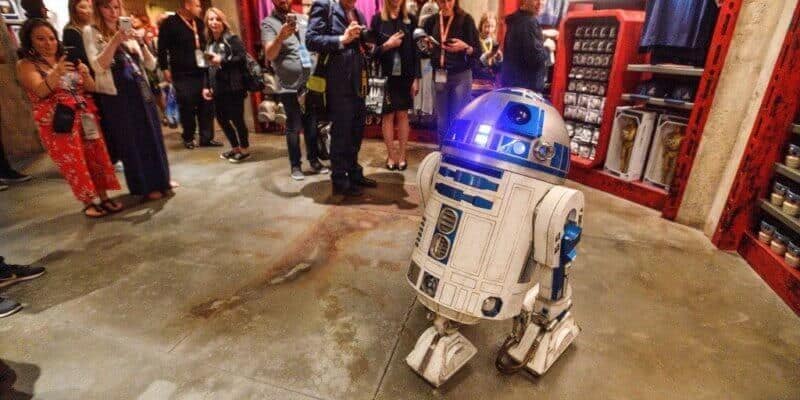 We published a report last week that shared that Disney isn’t planning on adding free-roaming, autonomous droids to Star Wars: Galaxy’s Edge anytime soon. But now we’ve been seeing R2-D2 roaming around Disneyland (with the help of a Cast Member). So does that mean Disney is bringing droids to the land after all? Here’s the scoop.

R2-D2 has been living inside the Droid Depot in Star Wars: Galaxy’s Edge ever since Batuu began welcoming guests in Disneyland on May 31. But as of this month, Disney has been issuing “play tests” for R2-D2 so the beloved droid can roam around Black Spire Outpost and interact with Disneyland guests — of course, with the help of a Cast Member controlling/guiding him (from what we can tell, he’s not fully autonomous yet).

Also keep in mind that there’s also a $25,000 remote-controlled R2-D2 currently for sale, if that suits your Star Wars fancy.

According to a recent update from OC Register, Disneyland Resort officials shared that the “play tests” with R2-D2 in Star Wars: Galaxy’s Edge are part of an ongoing innovation process looking at new ways for guests to experience Disney Parks. The experiences currently being tested with R2-D2 (and those that were tested back in 2017 with J4K3 in Tomorrowland in Disneyland) may end up as theme park offerings, or they may not, depending on how the tests go and how soon Disney can have the droids figured out.

While Disney shared earlier this month that there are no plans to have fully-autonomous roaming droids out and about in Galaxy’s Edge anytime soon, the Cast Member-controlled/guarded R2-D2 has us wondering if this is the first step. Maybe Disney will decide they want to start with remote-controlled droids and then over time use the free-roaming autonomous versions once those fully cleared as safe for guests.

Nothing has been announced so far — but as we mentioned before, Disney did include what looked like roaming droids in the original concept art for Star Wars: Galaxy’s Edge years ago, and this is one element of the land that fans have been yearning to experience since it opened. Hey, a Star Wars junkie can dream, right?

Do you think R2-D2 roaming around Galaxy’s Edge in Disneyland is a sign that Disney wants droids to be out and about in the land in the future? Or do you think it will be months or even years before we get autonomous droids in the  Star Wars-themed land? Let us know in the comments.