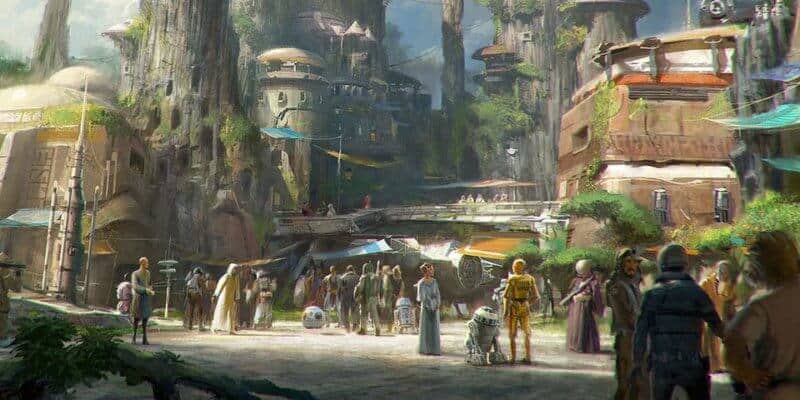 If you’re a Star Wars fan who has been patiently waiting for roaming droids to come to Galaxy’s Edge, you might not want to hold your breath. It looks like, according to Disney officials, roaming droids won’t be coming to the Disney Parks anytime soon.

A new report by local southern California newspaper the OC Register confirms that Disney doesn’t plan to have autonomous droids roaming around either the west coast or the east coast theme parks in the near future.

This news might come as a shock to some. Many remember the concept art back when Star Wars: Galaxy’s Edge was first announced, and what looked like free-roaming droids in the illustrations of the land way back before it ever opened (and way before the name for the land was announced).

Die-hard fanatics were looking forward to seeing droids interacting with guests, just as they would interact with other life forms in the Star Wars universe. But it’s been months since the land first opened in Disneyland in California and in Disney’s Hollywood Studios in Florida. And while we’ve been waiting for the day that autonomous droids would finally have a permanent presence roaming around the theme parks — and as many even speculated that they would be introduced sometime after Star Wars: Rise of the Resistance opened — that day hasn’t come.

Those of you who remember Jake, the awesome free-roaming droid who made an appearance in Tomorrowland in Disneyland back in 2017, are probably disappointed to hear that he won’t be coming to Galaxy’s Edge on the other side of the theme park, either. If you recall two years ago when Disney brought Jake (or J4-K3) to Tomorrowland, Disneyland guests like us were pretty blown away by his looks, personality, and roaming capabilities. It’s practically ever Star Wars fan’s dream to get to interact with a life-size droid in person, so seeing Jake in Tomorrowland was pretty epic.

“Jake has many sensors onboard that allow him to make decisions to determine where to go and how to move,” said Walt Disney Imagineering Research and Development Manager, Ashley Girdich, via email to the OC Register. She also said that the three-foot-tall droid “uses sound, color and lights to communicate.”

J4-K3/Jake was part of Walt Disney Imagineering’s autonomous character pilot program. And after he underwent testing in Star Wars Launch Bay in Disneyland’s Tomorrowland, he was introduced to roam around the actual land, which had been digitally mapped for the play tests so Jake could “see” the theme park guests moving around him and utilize computer algorithms to anticipate each person’s likely path. Essentially, the droid could move around and interact with guests without crashing into them.

But even when Jake was being tested in Tomorrowland, Disney hadn’t formally announced that he would be coming to Galaxy’s Edge. And, as the OC Register reports, Imagineering has no current plans to use the autonomous character technology in Star Wars: Galaxy’s Edge, neither with Jake nor with any other droid or character.

It looks like Jake is currently undergoing updates and testing to make him a more reliable droid. We’re not sure if or when he and other droids will be coming to the  Star Wars-themed lands at Disneyland Resort and Walt Disney World Resort, but we hope we learn more soon.

Just because you can’t see autonomous droids in Star Wars: Galaxy’s Edge doesn’t mean you shouldn’t still visit the new land in either Disney World or Disneyland! There’s still plenty to do in Black Spire Outpost on Batuu, and the lack of roaming droids isn’t a dealbreaker. Go try some blue milk or a Ronto wrap, get some provisions at Oga’s Cantina, pilot the Millennium Falcon, choose your kyber crystal for your custom lightsaber, or even build your own droid. There’s so much to explore at Galaxy’s Edge still — so click here for a free, no-obligation vacation quote to book a trip. You won’t regret it!

Do you hope roaming droids will come to Galaxy’s Edge? Let us know in the comments!