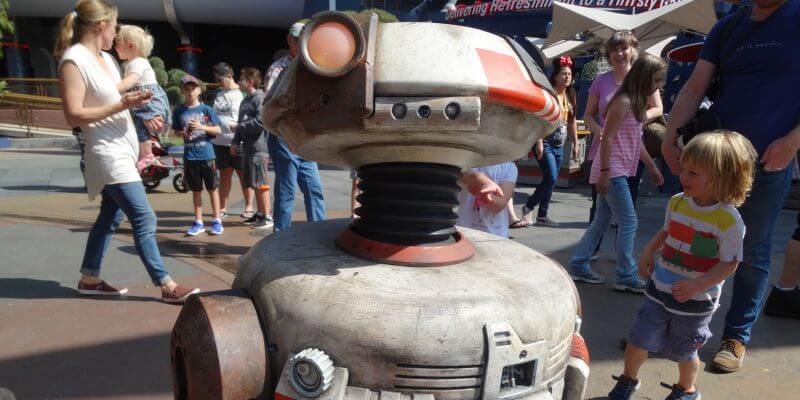 The enormous Star Wars: Galaxy’s Edge expansion at the original Disneyland in Anaheim, California is still about a year and a half away, but that’s doesn’t mean we’re not steadily seeing incremental progress in the park’s efforts to make the fully-immersive Star Wars experience a reality.

This week Disneyland began testing a new “Star Wars” droid named J4-K3 (or simply “Jake”) around the exterior walkways in Tomorrowland. Previously the droid had appeared briefly inside the Star Wars Launch Bay building, but sightings were rare until now.


Jake rolls freely around Tomorrowland, interacting with guests, beeping and making a revving-engine “vroom” sound whenever someone gets in his way, stopping intermittently to pose for photographs, and even letting children hug him.

J4-K3’s behavior is similar to what I saw with Savioke’s Relay service robot at the Disney Accelerator demo day event earlier this week, and considering their already-announced collaboration with Walt Disney Imagineering, I would not be at all surprised to hear that the tech company contributed to this droid’s development.

Star Wars: Galaxy’s Edge is expected to open within the first half of 2019 at Disneyland Resort.