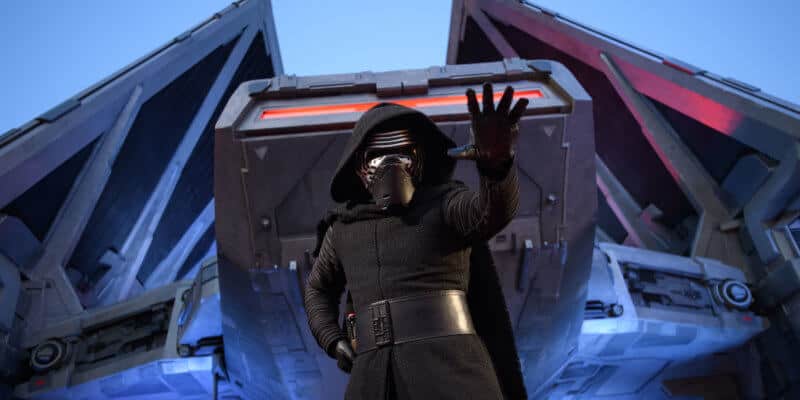 After spending quite a lot of time in Star Wars: Galaxy’s Edge, we thought it was a good time to look at everything that Disney has gotten right about the land, alongside some (Stormtrooper) misfires that still needs work. And if you’re talking Jedi/Sith, you could say this is a comparison of the Light vs. Dark Side of Galaxy’s Edge.

The Light – The land is beautiful

There’s no doubt about it: Disney’s Imagineers put everything into the design of the land. There’s nothing that quite explains the feeling you feel when first stepping into the world of Batuu. It actually feels like you’re wandering around a distant planet. Shops, quick service locations, queues and even doors have the flashy buttons that look like they do from the movie.

While it’s fair to say that Disney has been great at land immersion for years, Galaxy’s Edge is proof that they are the masters.

While the land is beautiful and it does feel like you’re wandering around a distant planet, it’s also busy, really busy. While you might say this feels like the reality of the bustling Black Spire Outpost of Batuu, it is this element of the land that simply makes it feel like any other theme park area that’s recently been opened.

The Light – Storytelling is fantastic

The Imagineering team at Disney put a lot of effort into getting the storytelling right. Sure, there are a lot of fans that would have liked the setting to be in the original trilogy or prequel trilogy but for the most part, Disney has been clever to focus on the newer trilogy characters and to create an entirely new storyline for this land.

Walking into the land, you will see very quickly that there’s a story to this place. The Resistance is camped out on one side, being wary of the First Order and the Troopers who are wandering around, questioning any guest that they think maybe working for the Resistance.

This storytelling has led to some fantastic character interactions over the past few months and we’ve personally seen people’s faces light up with joy when they’ve been stopped by a favorite character.

The Dark – The Story is taken a little seriously

While a lot of people have spoken about the story being a bit samey if you’ve visited the land more than a few times (this is certainly fair to say), we wanted to pass comment on just how seriously the cast members take the storytelling.

We’ve heard accounts of someone’s credit card not being taken in Oga’s Cantina with the only reason being given as “your credits aren’t good here” and have been around when a cast member has struggled to give guest directions to Launch Bay because there “are no Wars of Stars here.” It’s fantastic to have a coherent storyline but Disney must allow their cast members to break characters when credit cards have been rejected or guests are genuinely lost.

The immersion also falls down a little when you step foot into Oga’s Cantina. While the Cantina is one of the best experiences we’ve ever done at a Disney Park, it was a little surprising to not see the storytelling extend here. We pictured characters interacting with other characters at the bar, First Order Troopers bursting in looking for Resistance activity, that kind of thing.

Smugglers Run is a fun ride with great storytelling, a fantastic Hondo animatronic and just seeing the Falcon outside of the main attraction is a memory we will keep with us forever.

Sitting behind the cockpit of the Millenium Falcon is a childhood dream come true and piloting the ship is among the most fun you will have on a Disney Parks attraction. You cannot take that feeling away from this attraction.

While Smugglers Run is incredible if you’re a pilot, if you are a gunner or engineer, it goes from being a 9/10 attraction to a 3/10 attraction.

It’s a real shame that the experience between positions shifts that much in quality. Not having a view of the screen for most of the ride just isn’t that fun. Pilots are most certainly having the best time on the attraction.

The Light – The food and beverage options are fantastic

We’ve mentioned previously that Oga’s Cantina is one of the best experiences we’ve ever done in a Disney Park and while a lot of that is down to the design of the Cantina, the work that has been put into making the beverages look and feel like they belong in the Star Wars Universe is just astounding. We’ve tried a lot on the menu and everything in there (perhaps aside from the basic looking beers) is just incredible.

Likewise, the bar snacks at the Cantina alongside food that can be found at Docking Bay 9 and Ronto’s Roasters is out of this world and also a great options for vegetarians and vegans.

The Dark – There’s still work to be done

Food and drink (especially alcoholic) options at Galaxy’s Edge are among the most expensive any Disney Park and there’s no real reason for this being the case other than the fact that it’s set in the Star Wars Universe.

Also, though the existing food and beverages all taste great, we’d still really like to see a proper sit-down restaurant come to Galaxy’s Edge, that would be quite something.

In summary, though it has its quirks, we are still in love with Galaxy’s Edge, Disney has done a fantastic job so far with the land and with the Rise of the Resistance now very close to opening, expect the land to get even better in the near future.

If you’re planning a trip to a galaxy far far away then make sure you get in touch with our friends over at Academy Travel for a free, no-obligation quote. The team of Authorized Disney Vacation Planners at Academy Travel can help answer all your questions and plan your trip so you can focus on having a magical Disney vacation without any stress. Click here to contact them and begin planning your family’s first Disney vacation!

We would love to hear your thoughts on Galaxy’s Edge in the comments below!

Comments Off on Light vs. Dark Sides of Galaxy’s Edge: Pros and Cons of Disney’s Star Wars Land