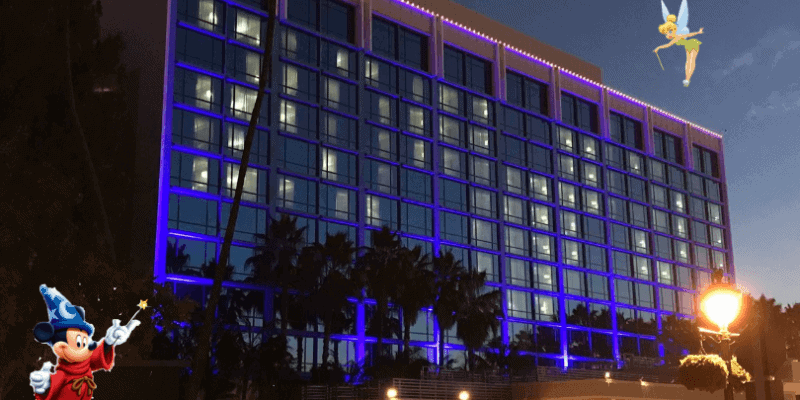 Now that Downtown Disney District has reopened at the Disneyland Resort, Disneyland park-goers are seeing the light at the end of the tunnel.  It’s been 4 months since the Disneyland Resort closed its doors, but now we’re getting glimpses of twinkle in the Disney magic once again.  Throughout this closure though, there’s been some light that has still illuminated the resort, and that’s the Disneyland Hotel!

We’re not sure if Mickey got a little bored in his sleepover at the Disneyland Hotel with no guests, or if Tinkerbell wanted to put a little sass on the place.  Maybe, Sorcerer Mickey and Tinkerbell teamed up to make this happen just to add a little faith, trust, and pixie dust!  But periodically, we’ve been able to see a Mickey face light up the front of the Fantasy Tower at the Disneyland Hotel.

In mid-April this photo of a Mickey face using the hotel room lights was captured.  Most recently, another photo has been captured of the beautiful night lights of the Disneyland Hotel.  This time, Mickey Mouse’s head was surrounded by two 20’s signifying this year 2020.  Though, this has been a very unpredictable year, Disney is still able to show us a little magic.

When this lighting package originally debuted, the Fantasy Tower was lit up only with #MickeyMouse’s silhouette — as seen in this aerial footage captured in mid-April by the @AnaheimPD for a promo video. (Screenshots from this video: https://t.co/5BBXFsB5vx). pic.twitter.com/PJG1SLaGtJ

This gives us all a little hope that we’ll be able to one day return to our Disney family vacations.  Mickey wants us all to remember that he’s still around, and he’s not going anywhere, but I don’t think anyone could forget him anyways.  For now, we can admire these lights as we walk into Downtown Disney in the evening to enjoy some Disney treats at Marceline’s Confectionary.

Before you visit Downtown Disney, be sure to check out all the new guidelines so you’re prepared for your adventure, and you want to know what’s open at Downtown Disney right now, check here!

Click here to book your next trip to Disneyland Resort!

Comments Off on Mickey Mouse Lights Up the Disneyland Hotel