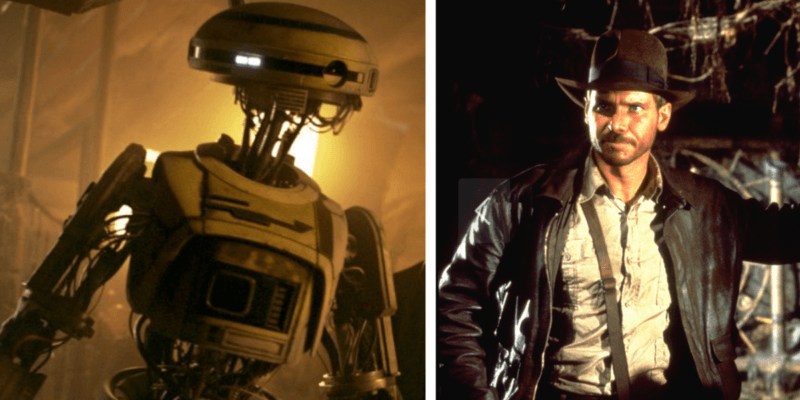 It’s been a while since we have had any updates regarding the upcoming Indiana Jones movie which is set to be the fifth installment in the franchise. The original movie, Raiders of the Lost Ark (1981) — which led to the subsequent films Temple of Doom (1984), The Last Crusade (1989) and Kingdom of the Crystal Skull (2008) — were originally conceived between Star Wars creator George Lucas and his friend and director, Steven Spielberg.

Well now, it seems that there will be a somewhat Solo-style reunion happening as Phoebe Waller-Bridge has been revealed as the female lead in the new movie, starring alongside Harrison Ford, who is reprising his famous archaeologist meets adventurer role.

According to the official press release, the Emmy winner, who played fan-favorite and pop culture droid icon L3-37 in Solo: A Star Wars Story (2018) alongside Alden Ehrenreich as a young Han Solo and Donald Glover’s Lando Calrissian, will join the original space smuggler in the next Indiana Jones movie.

On discussing the news and the already stellar cast and creative team, director James Mangold said:

“I’m thrilled to be starting a new adventure, collaborating with a dream team of all-time great filmmakers. Steven, Harrison, Kathy, Frank, and John are all artistic heroes of mine. When you add Phoebe, a dazzling actor, brilliant creative voice and the chemistry she will undoubtedly bring to our set, I can’t help but feel as lucky as Indiana Jones himself.”

Waller-Bridge — who might be best known for her award-winning smash, Fleabag — joined team Lucasfilm in the Star Wars universe when she voiced the sharply critical L3-37, and quickly becoming a popular fan-favorite character. Her partnership with Glover’s Calrissian brought an edgy comedic duo to the big screen, joining the likes of R2-D2 and C-3PO, and Han Solo and his Wookiee companion, Chewbacca.

Ford and Waller-Bridge obviously didn’t work on the standalone Solo movie, which joined Rogue One: A Star Wars Story (2016) as the second standalone feature film, but it is interesting to see these world’s collide. The latter, of course, taking place right before Star Wars: Episode IV – A New Hope and includes that CGI Carrie Fisher sequence.

Lucasfilm broke the news, also disclosing that famous Star Wars composer John Williams will also return to the franchise. Williams’ entire catalogue is groundbreaking. From the iconic Star Wars theme during the opening crawl to his work on the previous Indiana Jones films, his compositions have, over his many working years, become embedded in popular culture and continue to stand the test of time.

At this time, it is not clear who Waller-Bridge will play but her proven track record of taking on a variety of different characters, as well as her creative prowess on television shows Fleabag and Killing Eve, will certainly add an artistic punch into the upcoming Indiana Jones movie. While the plot is tightly under wraps, the film is set to release in theaters July 29, 2022.

If adventure has a name…it must be Indiana Jones! Phoebe Waller-Bridge (Fleabag, Solo: A Star Wars Story) will star alongside Harrison Ford, who is returning to the role of the legendary hero archaeologist, for the fifth installment of the iconic franchise.

In addition, the inimitable John Williams will return to score the film, continuing a musical journey which began 40 years ago with Raiders of the Lost Ark. Williams’ unforgettable Indy soundtracks, packed with all the epic thrills, suspense, romance and excitement that fans have come to expect from an Indiana Jones movie, have become as beloved and familiar as the adventurer-hero’s signature hat and whip.

“I’m thrilled to be starting a new adventure, collaborating with a dream team of all-time great filmmakers,” said the film’s director James Mangold. “Steven, Harrison, Kathy, Frank, and John are all artistic heroes of mine. When you add Phoebe, a dazzling actor, brilliant creative voice and the chemistry she will undoubtedly bring to our set, I can’t help but feel as lucky as Indiana Jones himself.”

Are you excited to see Phoebe Waller-Bridge in Indiana Jones 5?