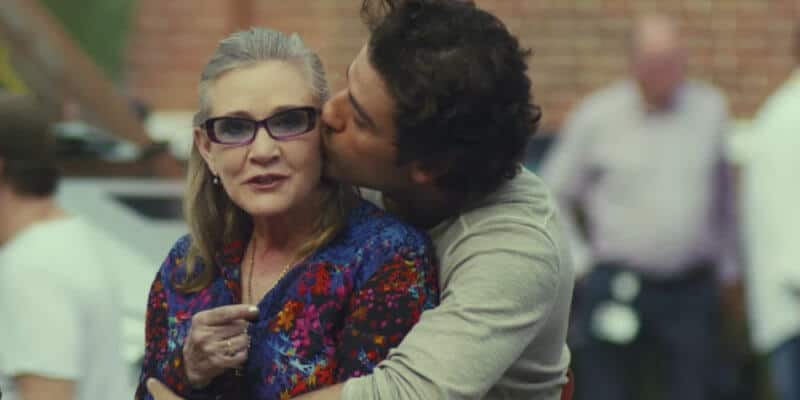 If you’ve watched the Star Wars sequel trilogy, you undoubtedly know that one of the bright spots of the final Skywalker Saga trilogy was the relationship between Princess General Leia Organa (Carrie Fisher) and ace pilot Poe Dameron (Oscar Isaac).

There’s little doubt that Leia’s soft spot for the cocky Resistance pilot is because he reminded her of someone else in her life. If you guessed Han Solo (Harrison Ford), you’re 100% correct.

At one point in Rian Johnson’s Star Wars: Episode VIII – The Last Jedi (2017), General Organa has had enough of Dameron’s insubordination — no matter how much she likes him — and in a moment that is pure, original trilogy Leia, she demotes her ace pilot.

In a previous interview on The Late Show With Stephen Colbert, Isaac shared how tough the demotion scene was to get right — and that the late actress had to slap him over 40 times in a single day!

“…a large amount of the stuff that I got to do was with Carrie, which was amazing…I remember the first day of shooting was a scene with Carrie and it was still — you know, oftentimes, the first day, the filmmakers, everybody’s trying to get the tone and figure it out — and, I remember, it was a scene where I come to talk to her and she was very upset with me and she slaps me and Rian kept doing it over and over…

…It ended up being 27 takes of Carrie just leaning in and every time she would hit a different spot on my face.”

When Entertainment Tonight shared The Last Jedi blooper reel, it was revealed that, although Isaac said there were just 27 takes, Fisher slapped the Star Wars actor 40 times in a single day while they worked on the challenging scene!

In the Colbert interview, Isaac went on to commend the late actress, who has also been fondly remembered by her original trilogy costars, Ford and Mark Hamill (Jedi Knight Luke Skywalker).

The iconic trio all appeared in the Star Wars sequel trilogy, each playing a major role in a different film — Ford featured heavily in Star Wars: Episode VII – The Force Awakens (2015), Hamill’s Ahch-To exile was showcased in The Last Jedi, and Star Wars: Episode IX – The Rise of Skywalker (2019) paid homage to all three actors, but especially to Princess Leia’s legacy.

“She was by far the quickest-witted, funniest, most down-to-earth, real human being I ever had the opportunity to work with…yeah, it was definitely a heartbreaker [referring to Fisher’s 2018 death].”

You can watch the full Oscar Isaac interview below:

What’s next for Oscar Isaac?

Although Oscar Isaac has said he has no plans to return to the Star Wars universe — a sentiment echoed by his co-stars Daisy Ridley (Rey) and John Boyega (Finn) — he is not done with The Walt Disney Company.

Recently, it was confirmed that the actor will play the leading role in Marvel’s upcoming Moon Knight series on Disney+. It is one of numerous streaming series that Kevin Feige and Co. will be working on for the streaming service in the next few years.

Isaac’s move from Lucasfilm to Marvel Studios could even pave the way for another famous actor, Robert Downey Jr., to switch franchises in the opposite direction.

Per IMDb, Isaac, who is known for Inside Llewyn Davis and Ex Machina in addition to Star Wars, has eight projects — including Dune and Marvel’s Moon Knight — in the works right now. Most prominently, he will be playing Solid Snake in the film adaptation of the Metal Gear Solid video game.

He will also voice Gomez Addams in an upcoming animated version of The Addams Family.

What do you think about this fun story about Carrie Fisher and Oscar Isaac?