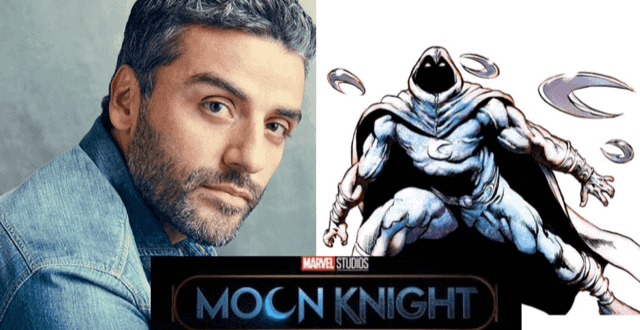 The Marvel Cinematic Universe is about to break into its fourth phase with plenty of new shows and films! Recently, Marvel has added a new Disney+ series to that list and has already cast its star.

Marvel is developing a Moon Knight series for Disney+. As we’ve learned from Deadline, Moon Knight, also known as Marc Spector, will be played by Star Wars star Oscar Isaac!

Jeremy Slater, whose works include Netflix’s Umbrella Academy, is tapped for assembling a writing team for the new Marvel series. This will be added to the list that already consists of WandaVision, Loki, and The Falcon and the Winter Soldier, just to name a few!

Next, Moon Knight will need to add a director to their roster and begin production. No production date or debut date has been announced. However, we can hope for Moon Knight to begin filming and production within the next year and be a part of MCU’s phase 4.

Although we don’t have any concrete details of what the series will be about or what the Star Wars star will bring to the series, here’s what Marvel has to say about the character that is Moon Knight:

Born to a respectable family, but eschewing its history and beliefs Marc Spector cut his own path through life by becoming a boxer, a Marine, and finally a CIA operative. Disgusted by the organizations practices and hurt by his own brother Randall’s betrayal, Spector ejected whatever morals he still possessed and fell into mercenary work around the globe.

Struggling with multiple personalities and amoral inclinations, Marc Spector fights on against all odds as the cloaked avenger Moon Knight.

With what we’ve learned so far about this character’s origins, we can definitely see why Marvel would want to bring this to viewers on Disney+. And with Oscar Isaac at the forefront, we’re excited to see how Marvel’s Moon Knight will all comes together!

What do you think about Marvel’s new upcoming series Moon Knight? Let us know in the comments!