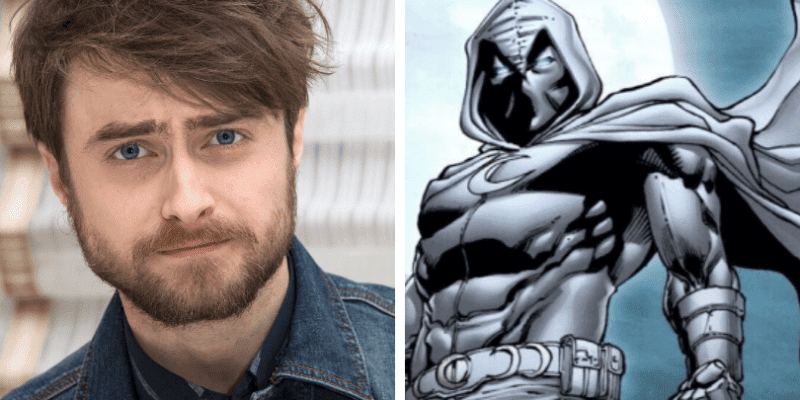 What other actors can Marvel recruit for its Cinematic Universe? There’s a good chance Daniel Radcliffe might be next.

As Marvel fans and Disniacs get ready for Marvel’s Disney+ series, Moon Knight, it appears that Daniel Radcliffe is being eyed for the role of Marc Spector.

Nothing is confirmed, of course. This is just a rumor. But, let’s break this down and maybe learn more about how this casting choice could work for this next Marvel franchise.

What the heck is Moon Knight?

Okay, Moon Knight is another superhero Marvel will be incorporating into their Cinematic Universe via Disney+ series. It follows the story of Marc Spector. He is a former CIA agent who was almost killed by the terrorist known as Bushman. But, Spector was saved by Khonshu, the god of the moon.  Spector would go on to defeat Bushman and become Moon Knight, wearing his trademark all-white costume.

Related: “Avengers: Endgame” writer wants to bring Moon Knight to life in next phase of MCU

While he is technically a good guy, Spector is also known for having a twisted sense of humor and suffering from a multiple personality disorder. Between having conversations with his other personalities and having a bipolar outburst at the drop of the hat, Spector is definitely a character that will keep the audience on the edge of their seats. Moon Knight is promised to be unlike any other Marvel series, and will provide an edge critics have said is missing from the MCU.

In the comics, Spector’s personalities include Steven Grant, Jake Lockley, and Khonshu himself.

Okay, but why Daniel Radcliffe?

Since he left the world of Harry Potter, Radcliffe has actually recorded a very edgy and experimental acting career. He’s played very eccentric characters in movies such as Horns, Swiss Army Man, Victor Frankenstein, and Now You See Me 2. Radcliffe has also dabbled in serial TV, co-starring with Jon Hamm in BBC’s  (very) dark comedy, A Young Doctor’s Journal (I also highly recommend this show).

Radcliffe is an actor who is not afraid to go there. While he’s most known for a rather quiet, even-keel, teenage boy, Radcliffe has an erratic crazy side he is not afraid to show. However, most of his other performances dwarf in comparison to any role he’d get with Marvel. If we can get around the fact that it’s Harry-freaking-Potter doing edgy, anti-hero antics, there’s no doubt Moon Knight will be a success.

But what do you think? Would you want to see Daniel Radcliffe as Moon Knight? Let us know in the comments.