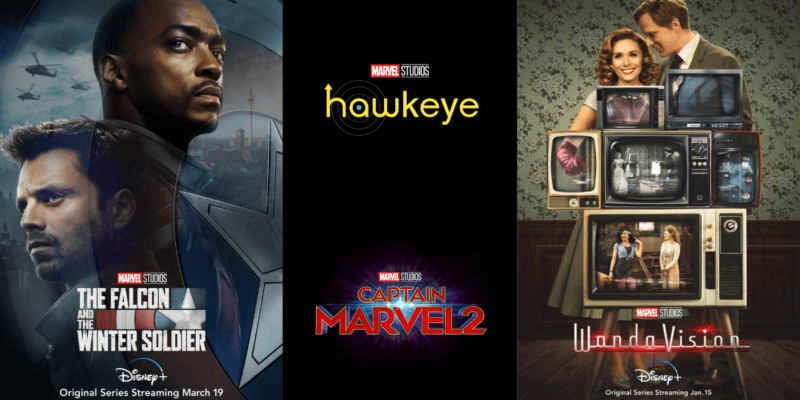 It has been a tricky year for Marvel Studios as they have had to navigate the coronavirus pandemic. Their highly anticipated movies, such as Black Widow and The Eternals, as well as original series for Disney+, The Falcon and the Winter Soldier, and WandaVision, have all faced production delays.

Now we have some new and exciting updates from Marvel Studios after Disney’s annual Investor Day event.

Due to the delays, Marvel fans have had a lot of questions about when they can expect new movies and streaming series to debut.

Keep in mind that Marvel reiterated that both Doctor Strange and The Multiverse of Madness and Black Widow will be a theatrical release, with no word on Disney+ or Premier Access.

Recently, after a lot of speculation, Marvel did give an update on WandaVision. WandaVision is scheduled to debut on Disney+ on January 15! And Marvel gave us an incredible new trailer that you can watch here!

This is what Disney had to say about WandaVision:

“We are an unusual couple.” Marvel Studios’ @WandaVision, an Original Series, starts streaming Jan. 15 on #DisneyPlus.

This series will follow both Wanda and Vision in events that take place after Avengers Endgame.

Also, Marvel gave us a look at the highly anticipated Loki series, which they described as a thrilling crime series. We are sure this will be as mysterious as Loki himself!

You can see the first look at Loki that was posted to Disney’s official Twitter,

Loki, an Original Series from Marvel Studios, is coming May 2021 to #DisneyPlus. @lokiofficial pic.twitter.com/gqT7AKur2y

Loki will be making good on his name as the god of mischief in his very own Disney+ series. We cannot wait to see what antics Loki gets himself into, and are glad to see Tom Hiddleston reprising his role after his death in the MCU.

Black Widow chronicles Natasha Romanoff’s efforts to deal with her history as a spy long before she became an Avenger. Directed by Cate Shortland and starring Scarlett Johansson, Florence Pugh, David Harbour, and Rachel Weisz. In theaters May 7, 2021.

Falcon and the Winter Soldier

Additionally, we got a great first look at the Falcon and the Winter Soldier which has us trying to speed up time — can it be March already?!

“The legacy of that shield is complicated.” Marvel Studios’ The Falcon and the Winter Soldier, an Original Series, starts streaming Mar. 19 on #DisneyPlus. pic.twitter.com/iJaquJEUGy

This series was described by Kevin Feige as a Marvel movie that was simply broken up into six parts. This will of course follow the story of Bucky and Sam as they grapple with what to do after the original Captain America is gone.

Shang-Chi and the Legend of the Ten Rings

This movie has been filming in Australia, and although we did not get a trailer fans are still excited for news on this new Marvel film. This will introduce Shang-Chi into the Marvel MCU and continue to add more diversity to the MCU.

Production is finished but a lot needs to be done in post-production before fans can see this film.

Everyone’s favorite Guardian of the Galaxy, Groot will get his very own series that is of course launching on Disney+!

All we can say about this announcement is, I AM GROOT!

I Am Groot, an Original Series from Marvel Studios, is coming to #DisneyPlus. pic.twitter.com/U5nfDkFKjW

Iornheart, which was speculated inside the Marvel fandom, will get its own series on Disney+ was confirmed by Kevin Feige.

This series will follow up after the events of Avengers Endgame, but not many other details were released at this time. Hopefully, we will get a release date soon

Coming soon to #DisneyPlus, Dominique Thorne is genius inventor Riri Williams in Ironheart, an Original Series about the creator of the most advanced suit of armor since Iron Man. pic.twitter.com/VB94VyPr9e

Marvel’s What If…? series is really exciting as it will explore through animation, everything that could be or might have been in the universe of Marvel. This series was initially announced when Disney+ first launched and the first look is very exciting. I would say this one is worth the wait.

WHAT IF…?, an Original Series from Marvel Studios, is coming Summer 2021 to #DisneyPlus. pic.twitter.com/P8VDm2rhXJ

Mark Ruffalo will return in this series that is of course going straight to Disney+ and will follow the comic book hero, She-Hulk herself!

She-Hulk arrives to the MCU! Tatiana Maslany will portray Jennifer Walters/She-Hulk and Tim Roth returns as the Abomination and Hulk himself, Mark Ruffalo, will appear in the series. Directed Kat Coiro and Anu Valia, She-Hulk is coming to #DisneyPlus pic.twitter.com/z4OlQJhrlr

This previously announced Marvel series for Disney+ did not get a release date today, unfortunately. Hopefully, we will get more information soon!

Moon Knight, an Original Series about a complex vigilante, is coming to #DisneyPlus ? pic.twitter.com/oESb9qLSJD

A Fantastic Four film was confirmed, but no announcement on the fan casting for the series, as many wonder if Emily Blunt and husband, John, will play the roles in Marvel’s leading family.

Ant-Man and the Wasp: Quantumania

Ant-Man 3 finally got a big announcement as an official title to the movie was released. All the key actors are reprising their roles, and we can’t wait to see what antics Ant-Man can get into while continuing to expand complex concepts inside Marvel’s MCU.

Peyton Reed is back to direct the third Ant-Man film, Ant-Man and the Wasp: Quantumania. Paul Rudd, Evangeline Lilly, Michael Douglas, and Michelle Pfeiffer all return. Kathryn Newton joins the cast as Cassie Lang and Jonathan Majors as Kang the Conqueror. pic.twitter.com/opXw1cmpFj

Directed by none other than Taika Waititi, the next installment in Thor is currently filming. Big announcement is that Christian Bale will be the villain of this movie! Again, Marvel doubled down on the theatrical release NOT a Disney+ release or premier access at this time.

Academy Award-winning actor Christian Bale will join the cast of Thor: Love and Thunder as the villain Gorr the God Butcher. In theaters May 6, 2022. ⚡ pic.twitter.com/fWS4UuP2oM

The Guardians of the Galaxy Holiday Special

The best announcement of the night was that James Gunn would be directing a Holiday special with everyone’s favorite Guardians! This is being filmed while the production of the latest Guardians movie is taking place.

The Guardians of the Galaxy Holiday Special. James Gunn is back to write and direct.

The Original Special is coming to #DisneyPlus in 2022. ? ? pic.twitter.com/8JqjhPo6Cn

War Machine is back, the role is being reprised by Don Cheadle, and is another series coming direct to Disney+.

Don Cheadle returns as James Rhodes aka War Machine in Armor Wars, an Original Series coming to #DisneyPlus. A classic Marvel story about Tony Stark’s worst fear coming true: what happens when his tech falls into the wrong hands? pic.twitter.com/K6M0q9mcNM

This Disney+ original is bringing back Nick Fury, so this is confirmation of the rumors Nick Fury series that has been circulating for some time now. We are glad to see it, but as it is still in it’s early phases of development no real news as of yet… Other than this IS happening!

Samuel L. Jackson is back as Nick Fury and Ben Mendelsohn from Captain Marvel returns as the Skrull Talos in Marvel Studios' Original Series Secret Invasion. Coming to #DisneyPlus. pic.twitter.com/AuInHMuBRW

Following the daughter of Hawkeye, this series will take place after the Avengers movies and will be an action-packed comic book-based series for Disney+.

Still in the early phases of development but we did get confirmation of a Captain Marvel movie, most likely for phase 5 of Marvel’s MCU.

What do you think of all the new Marvel announcements? Let us know your thoughts in the comments below!

Comments Off on BIG Marvel Series and Film Announcements at Disney Investor Day!