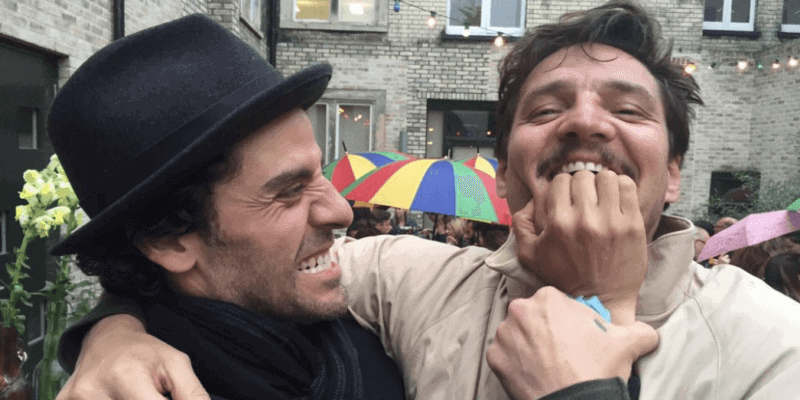 If there was a bright spot for Star Wars fans in 2020, it was The Mandalorian Season 2.

Now, Pascal — whose latest film, Patty Jenkins’s Wonder Woman 1984, just dropped in theaters and on HBO Max on Christmas day — has shared a photo of himself and another Star Wars icon leaving 2020 behind last night on New Year’s Eve! It seems that Oscar Isaac — who played General Leia Organa’s favorite Resistance pilot, Poe Dameron, in the sequel trilogy — joined Pascal to ring in 2021.

The Mandalorian actor shared the photo to his Instagram Stories (@pascalispunk):

PEOPLE noted the following about the fun photo, which is sure to delight just about everyone in the Star Wars fan community:

…[Pascal is] wearing a pointy silver party hat positioned lopsidedly atop his head.

As Isaac, 41, gazes open-mouthed up at Pascal, 45, the latter looks straight into the camera, tipping a bottle of beer back with his free hand.

As we head into 2021, both Pascal and Isaac are busy with projects under the Walt Disney Company banner.

Pascal, of course, will be shooting The Mandalorian Season 3, which showrunner Jon Favreau has said will release “shortly” after The Book of Boba Fett, which debuts on Disney+ in December 2021. At this time, the third season of The Mandalorian — along with spinoffs Ahsoka and Rangers of the New Republic — do not appear on Disney’s 2021 release schedule, so they are not anticipated until 2022.

Pascal spent more time without his beskar Mandalorian helmet in the second season of the series, as he learned more about what it really means to be a Mandalorian warrior — thanks, in part, to Bo-Katan Kryze’s explanation in “Chapter 11: The Heiress.”

Golden Globe winner Isaac, for his part, has said he is done with Star Wars, though if there’s one thing we’ve learned about the Star Wars universe, it’s to never say never — after all, Mark Hamill recently reprised his role as a young Star Wars: Episode VI – The Return of the Jedi (1983) lookalike Luke Skywalker in The Mandalorian Season 2 finale episode thanks to CGI de-aging technology.

The Guatemalan-born actor — known for Inside Llewyn Davis (2013) — did, however, recently sign-on to play the title role in Marvel Studios’ upcoming Disney+ series, Moon Knight. He has also recently agreed to play video game icon Solid Snake in the upcoming Metal Gear Solid movie, which is set to be directed by Kong: Skull Island (2017) director Jordan Vogt-Roberts.

The actor also recently made headlines when it was discovered that he had a 1990s ska band that once opened for the likes of both Green Day and the Mighty Mighty Bosstones.

Lucasfilm is presently working on at least 11 Disney+ Star Wars series and at least three feature length Star Wars films — there is no word on whether Mandalorian star Pedro Pascal or the sequels’ Oscar Isaac will take part in any of the movie projects.

Do you love that Star Wars stars Pedro Pascal and Oscar Isaac rang in the new year together in real life?