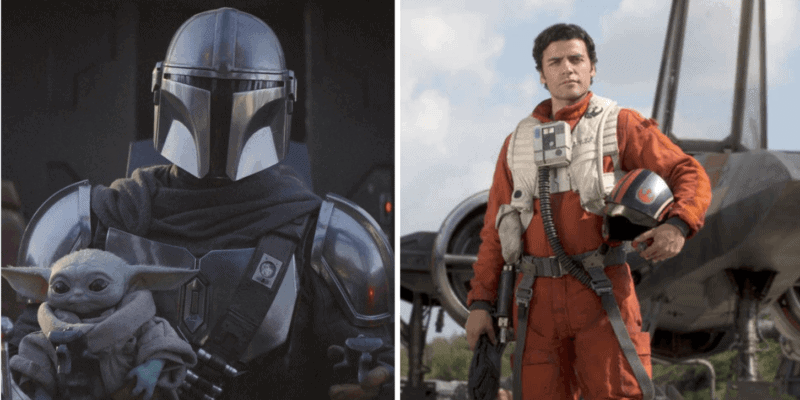 The Season 2 finale of the hit Star Wars series was epic — it featured the Darksaber vs. beskar spear battle we’d been waiting on all season long and showcased Din Djarin (Pedro Pascal) and his motley crew finally rescuing Grogu (AKA The Child AKA Baby Yoda) from Moff Gideon’s (Giancarlo Esposito) Imperial remnant, thanks to a little help from none other than Luke Skywalker (CGI de-aged Mark Hamill)

Now, as it turns out, there was another Mandalorian Season 2 Skywalker Saga cameo you might have missed. ScreenRant shares details about the end of the sophomore season’s penultimate episode, “Chapter 15: The Believer”:

…[there is] a secret Poe Dameron cameo in an affectionate call-back to the sequel trilogy. But rather than tying a younger version of Oscar Isaac’s fan-favorite character into the narrative (which may yet come in the massively expanded Star Wars TV universe coming to Disney+ very soon), he was used in a way that suggests the team behind the show’s look know exactly how popular Poe is.

In the usual fashion, “The Believer” included concept art from the episode’s biggest moments that played out over the credits, and Oscar Isaac appears twice in the place of pirate aliens.

Related: ‘Mandalorian’ Composer on How They Paid Respect to Original ‘Star Wars’

As ScreenRant points out, the inclusion of General Leia Organa’s favorite Black Squadron pilot, Poe Dameron (Oscar Isaac), was more than likely meant to be a fun ‘Easter egg’ for Star Wars fans — however, their note about it being possible that a young version of the Resistance pilot could appear in an upcoming Star Wars movie or series is intriguing.

Actor Isaac has made clear that he has no intention of returning to the Star Wars franchise — co-stars Daisy Ridley (Rey) and John Boyega (Finn) have made similar claims — but did recently sign-on to play the title role in Marvel’s Disney+ Moon Knight series.

Dameron was also featured, in animated form, in the LEGO Star Wars Holiday Special (2020) on Disney+, but Isaac was not involved in the project.

At this time, we don’t know exactly where in the timeline several of Lucasfilm’s upcoming Star Wars shows and films will fall, but it might be possible for Poe Dameron — at some age, with or without lovable droid BB-8 — to make a cameo in Patty Jenkins’s Rogue Squadron (2023), which is set to follow a new cast of X-wing fighter pilot characters.