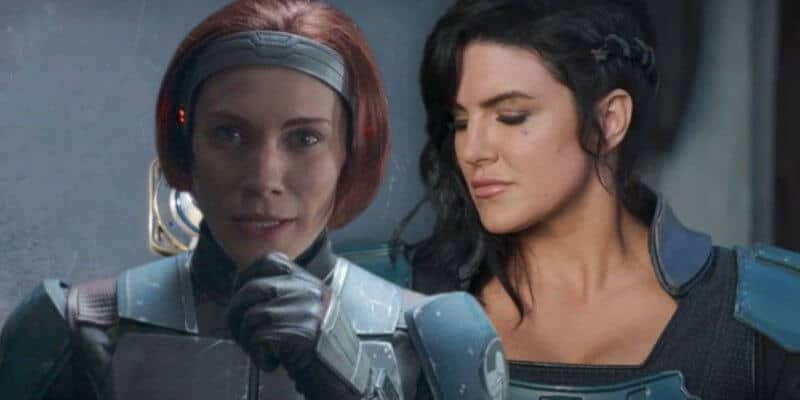 If you are a Star Wars fan, you likely have welcomed Jon Favreau and Dave Filoni’s Disney+ hit series The Mandalorian with open arms. One of the best aspects of the show, in this reporter’s opinion, has been the chemistry that is ever-present with the cast. Although some cast members, such as Gina Carano (who plays New Republic Marshal Cara Dune) and Katee Sackhoff (who plays Bo-Katan Kryze) are best friends now, things may not have begun that way.

We all have heard of the classic Hollywood catfights that some celebrities have, many of them being shared publicly online via social media and the press. Katee Sackhoff sat down with Schmoedown Entertainment Network for an interview, where she discussed what it was like to meet Gina Carano for the first time — and their very tangled-up history.

When asked about Carano, Sackhoff exclaimed, “Gina Carano is amazing! It’s so funny because Gina and I have literally been in the same circle for so many years. In the sense that, when Gina first came on the scene in Haywire, everyone started comparing she and I together.”

Carano played Mallory Kane in the 2011 film alongside Ewan McGregor — who is set to reprise his own Star Wars role as Obi-Wan Kenobi soon — and Michael Fassbender, and at this time Katee’s fame was highly due to her role as Captain Kara ‘Starbuck’ Thrace in Battlestar Galactica — both women are known for playing very fierce and strong characters.

Another reason Katee felt that the two were interconnected was through their representation, “We had the same agent, and so I think that our names were constantly against each other for projects.”

This is something that would have absolutely occurred. Many times, when casting breakdowns are released, character descriptions are led by an age range, gender, and character description that gives away some personality traits or plot points. Katee Sackhoff and Gina Carano may look different, but would likely often fit the same roles, and would likely audition against each other.

Sackhoff hilariously threw in that she thought Carano wanted to punch her, which would be fitting for the former women’s MMA fighter — however, the two clearly get along! On Twitter, the two publicly support one another. Gina even re-posted Katee’s Tweet when she found out #BoKatan got her own Twitter emoji.

Plus, it is not just Katee who is a fan of Carano! Pedro Pascal (title character Din Djarin in The Mandalorian) not only built a bond with Cara Dune from Season 1 Episode 4 (Chapter 4: The Sanctuary), but also Carano herself. Although Gina Carano’s outspoken political views and beliefs have been controversial subject matter, Pascal has always been nothing but supportive to Gina as well as highly complementary of her acting.

Bo-Katan Kryze, on the other hand has a lingering, storyline in The Mandalorian where she still wants to earn back the black-bladed Darksaber, and therefore, title as leader of Mandalore. Considering Din Djarin ended the season with the saber, it seems unlikely that Bo-Katan would let something of such importance go. That being said, Cara Dune could also re-appear in The Mandalorian Season 3 (whenever Disney decides to release it), and her appearance in Rangers of the New Republic is purely speculation.

Related: Pedro Pascal Talks ‘Mandalorian’ Fandom: “I Can Get Used to This”

Furthermore, both series are set to culminate in an epic streaming event with the characters who ultimately appear in another Mandalorian spinoff, Ahsoka.

For now, it’s great to know that the two are best friends and will stay in each other’s life regardless of where the Star Wars spin-off series lead them!

Would you like to see Cara Dune and Bo-Katan Kryze back on screen together? Or would you rather them pursue separate storylines?