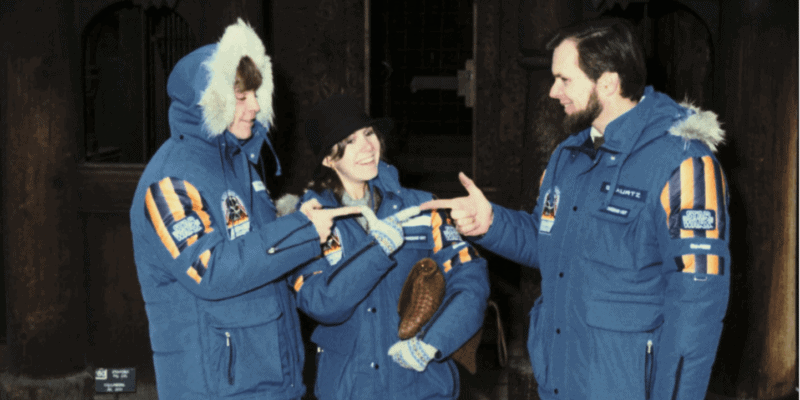 Over 40 years after the trio first appeared together in Star Wars: A New Hope (1977) — long before it was known as Episode IV — they reunited in the Star Wars sequel trilogy.

Archive footage of the late actress was used for some of her final scenes in the sequels.

Now, Mark Hamill has shared never-before-seen photos of him and Fisher during the original trilogy era. On Instagram, he wrote:

1st day of Empire in Finse, Norway. She had no scenes there, but came along just to hang out & not miss any of the fun. She always regretted not going to Tunisia for SW. It was also a way to make sure she got her own crew snow-jacket. (and yes, I still have mine) #TrueStory

Hamill has embraced the Star Wars fan community perhaps more than any other cast member, past or present. He frequently shares memories from A New Hope, Star Wars: Episode V – The Empire Strikes Back (1980), and Star Wars: Episode VI – The Return of the Jedi (1983).

After the sequel trilogy, Hamill indicated he had no future plans to return to the Star Wars universe as iconic Jedi Knight Luke Skywalker. That all changed when The Mandalorian debuted in 2019 and hooked the Star Wars fandom from the very first episode.

While it is not yet known if Hamill will reprise his role again in the future, he has acknowledged that working with showrunner Jon Favreau, executive producer Dave Filoni, and episode director Peyton Reed was something he “didn’t know he needed” and that he is immensely grateful for the opportunity to once again play his famous character.

Prior to his appearance in The Mandalorian, Hamill had a little-known cameo in Disney Junior animated series, Elena of Avalor. He voiced Vuli in the serious finale.

Next up, Hamill is set to voice Lieutenant Commander Steve ‘Old Man’ Colton in the Squadron 42 video game.

What do you think about these new photos of Carrie Fisher and Mark Hamill on set when they were young?