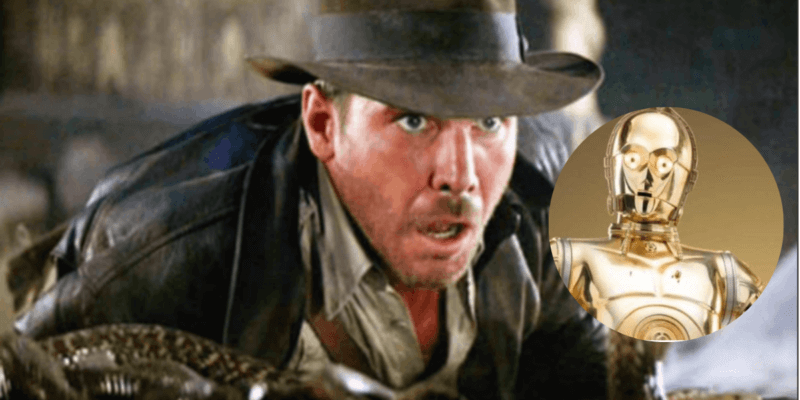 It’s true that there’s a connection between George Lucas’s Star Wars films and the Lucasfilm/Paramount blockbuster franchise, Indiana Jones. And no, we aren’t talking about Harrison Ford. Raiders of the Lost Ark (1981) was the first movie outing for the Lucas and Steven Spielberg partnership, who collaborated to bring Indiana Jones to the big screen.

It was an island encounter that brought Lucas and Spielberg together to birth the Indiana Jones franchise idea. After Star Wars (now, Episode IV – A New Hope) opened in 1977, Lucas sought shelter from the success of the hit sprawling space opera in Hawaii, where he pitched the idea to Spielberg. The rest is history. Four films later — and a fifth set for a 2022 release — the Indiana Jones movies feel like they are on their way to establishing their own cinematic universe.

With these two movie-making powerhouses at the wheel, Raiders of the Lost Ark was a rollicking adventure set in the globe-trotting world of archaeologist Indiana Jones (Harrison Ford), that has now amassed a whopping $389 million globally since its original release. Ford brought the rugged charisma he’d established as smuggler Han Solo in Star Wars and continued his path to international stardom. And yet, while Ford may seem like the point where the Raiders and Star Wars crossover ends, there’s actually another galactic appearance from two classic characters in the film, but you probably never saw it.

Well, you can’t expect two space droids to show up in an adventure epic set in Washington D.C. and Cairo, talking about Princesses and stolen data, can you? In fact, the Star Wars droids were immortalized in hieroglyphics. During the scene where Indy opens up the lid to the Ark of the Covenant, you can actually see C-3PO and R2-D2 engraved on the column.

Did you know R2-D2 and C-3PO make a cameo in “Raiders of the Lost Ark”?…Nice Easter Egg!

Did you know R2-D2 and C-3PO make a cameo in “Raiders of the Lost Ark”?… Nice Easter egg! #HappyEaster ? pic.twitter.com/yvONPipnCu

While the level of cinematic skill is evident between these two movie titans, it’s always interesting to see how they can inject cameos like these into their movies without regard to theming or realism. What started out as Spielberg wanting to direct a new James Bond film, came the rip-roaring frolics of Indiana Jones.

In early development talks, Spielberg even said that “what [they’re] doing here, really, is designing a ride at Disneyland.” It’s clear then, that Lucas’s and Spielberg’s efforts to bring a whip-wielding professor to our screens were always rooted in the fun and the imaginary, where pushing boundaries was paramount. And, somehow, this magical meeting of the minds would create the critically and commercially celebrated Indiana Jones blockbusters, which years later, would find themselves owned by the very company they were potentially conceived around.

In a world where it feels like we are always talking about Easter eggs, especially with franchises like the Kevin Feige-helmed Marvel Studios and Star Wars’ ever-growing universe, these early nods to other films are always entertaining. They show that this level of detail and element of fan-service is not just a “now” thing, but something that has always been involved in the filmmaking medium.

And, as ever, it’s always cool.

Did you know about this Indiana Jones Easter egg before now?