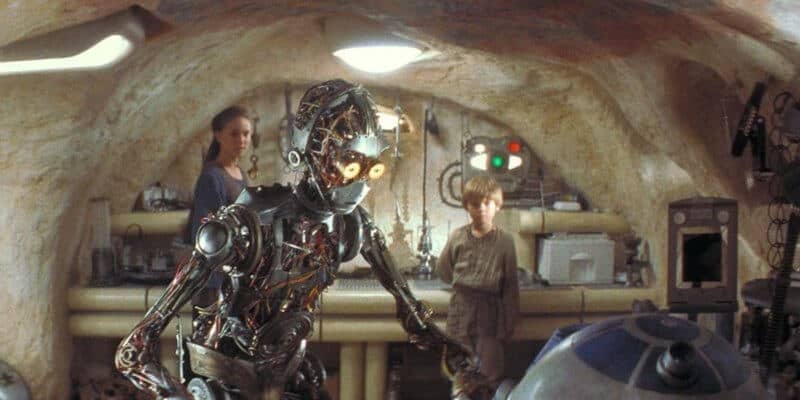 In Star Wars: Episode I – The Phantom Menace (1999), fans of George Lucas’s Star Wars original trilogy finally got a glimpse at the childhood of young Anakin Skywalker — the boy who would become Sith Lord Darth Vader.

When we met young Anakin (Jake Lloyd) on Tatooine, it was clear from the start that he had big dreams. In fact, as a boy, he built one of the most iconic Star Wars characters of all time — beloved protocol droid C-3PO (Anthony Daniels).

One question that has persisted since the prequel trilogy began 22 years ago, however, is why, exactly, did Anakin Skywalker construct this particular droid? Now, Star Wars has finally revealed the answer.

In the new book, Skywalker: A Family At War, author Kristin Baver wrote:

The boy longed for a life far from Tatooine, free to explore the galaxy and fulfill his dreams of becoming something far greater than a Toydarian’s property. The droid he constructed was capable of millions of forms of communication. Anakin dreamed that, one day, with C-3PO as his faithful traveling companion, he and his mother would be able to venture anywhere in the galaxy and be understood and be able to understand the natives, whatever their language.

As ScreenRant pointed out, Anakin’s dreams were only partially realized:

…for while he was freed from slavery on Tatooine he was forced to leave his mother behind; C-3PO was gifted to Padmé [Padmé Amidala] BY Anakin after their marriage on Naboo and accompanied her as a faithful companion throughout the Clone Wars, his knowledge of millions of forms of communication perfectly suited to assist a senator.

After Padmé tragically loses her life giving birth to twins Luke Skywalker and Leia Organa, Threepio goes on to become their companion as they traverse the galaxy on Han Solo’s Millennium Falcon during the Rebellion era.

Then, the droid ultimately sacrifices himself at the hands of Babu Frik in the final installment of the Skywalker Saga, Star Wars: Episode IX – The Rise of Skywalker (2019).

He could not give up the ancient Sith translation his friends — and the Resistance — needed without having his memory wiped, and he willingly did so in a poignant scene that confirmed the droid did, in fact, remember everything he had seen over the years, from Anakin’s fall to the dark side to saving the galaxy from the second Death Star on Endor in Star Wars: Episode VI – Return of the Jedi (1983).

This act of sacrifice to stop Emperor Palpatine’s cult of clones on Exegol was a full-circle moment in the Star Wars story — Darth Vader, too, ultimately sacrificed his life in a moment of selflessness at the end of the original trilogy.

Both C-3PO and Darth Vader/Anakin Skywalker are set to appear in the Star Wars franchise again on Disney+ moving forward. We will next see Vader in Obi-Wan Kenobi (2022) when Hayden Christensen reprises his prequel trilogy role alongside Ewan McGregor’s iconic Jedi Knight.

The series will take place about ten years after Star Wars: Episode III – Revenge of the Sith (2005) and will follow Kenobi on Tatooine as he tries to come to grips with the downfall of the Jedi Order.

Related: Is an Animated Grogu Coming to Disney+?

C-3PO is next expected to appear in the animated series, Star Wars: A Droid Story, which will follow the adventures of Threepio and R2-D2 alongside a brand new Star Wars character. A release date for the series has not yet been set.

What do you think about Lucasfilm finally revealing why Anakin Skywalker constructed C-3PO?