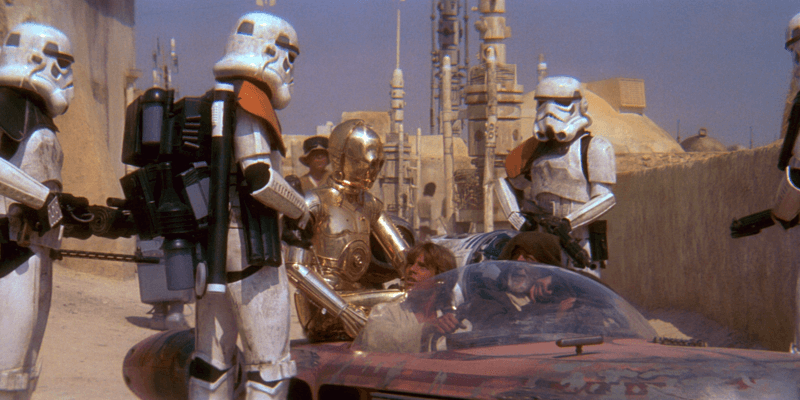 While all Star Wars fans are familiar with the conflict between the Galactic Empire and the Rebellion in the popular franchise, not everyone is aware of the fact that George Lucas’s original Star Wars movie almost caused an actual war.

The team behind the Star Wars universe eventually settled on a Tunisian desert as their filming location. As it turns out, however, tensions between Tunisia and neighboring Libya were running high in the 1970s — and Jawa Sandcrawlers look an awful lot like real military vehicles. You can see where this is going, right?

One report on the (almost) international conflict shared these details:

Matters reached high intensity when Libyan made a demand that Tunisia immediately cease its provocative deployment of a massive military vehicle near the border. Gaddafi warned that conflict was inevitable if Tunisia did not comply with his demands at once.

The offensive military vehicle in question was a Jawa Sandcrawler. If the demands had come after Star Wars was released, Lucas might have been in a better bargaining position. Since the release of the first installment in the series, Star Wars films have generated more than $10 billion (adjusted for inflation) worldwide. At the time, however, Lucas was more interested in getting the first movie done than he was in taking the battle of good and evil directly to Gaddafi. He quickly agreed to move the Sandcrawler to a less-provocative location.

Related: Boba Fett Made a Live Appearance Before the ‘Holiday Special’

Then, from 1999 to 2005, Lucas oversaw the continuation of the Star Wars story with the prequels, which shared the love story of Anakin Skywalker (Hayden Christensen) and Padme Amidala (Natalie Portman) — ultimately giving fans a glimpse into Skywalker’s descent to the dark side as he became Sith Lord Darth Vader.

The prequels, though much-maligned for their corny dialogue (and the mere existence of Jar Jar Binks) when they originally hit theaters, have grown on the Star Wars fan community through the years.

Finally, after 40 years at the helm of Lucasfilm, Ltd., George Lucas sold Lucasfilm to The Walt Disney Company in 2012.

What’s next in the Star Wars galaxy?

Although there are several feature-length Star Wars movies in the works, including Patty Jenkins’s Star Wars: Rogue Squadron (2023) and Taika Waititi’s untitled project, the future of the Star Wars franchise lies largely on the Disney+ streaming platform.

This is largely due to the success of Jon Favreau and Dave Filoni’s The Mandalorian, starring Pedro Pascal as bounty hunter Din Djarin and Grogu (AKA Baby Yoda) as, well, himself.

Four of the confirmed series will take place within Faveau and Filoni’s Mandalorian universe. Fans can look forward to The Mandalorian Season 3, Ahsoka featuring Rosario Dawson as Ahsoka Tano, Rangers of the New Republic, and The Book of Boba Fett showcasing Temuera Morrison as the bounty hunter and Ming-Na Wen as Fennec Shand.

Mandalorian creator Jon Favreau has confirmed that The Book of Boba Fett will debut in December 2021, referring to the show as the “next chapter” in the classic space war franchise.

Next up, though, in the Star Wars saga is a brand new animated series. Star Wars: The Bad Batch — a spinoff of a Star Wars: The Clone Wars story arc about a rogue clone trooper squad — will premiere on May 4, 2021.

Too much is never enough when it comes to a galaxy far, far away — and, hopefully, we can avoid any more international conflicts in the future.

Did you know Star Wars almost started an actual war?

Comments Off on ‘Star Wars’ Almost Caused an Actual War