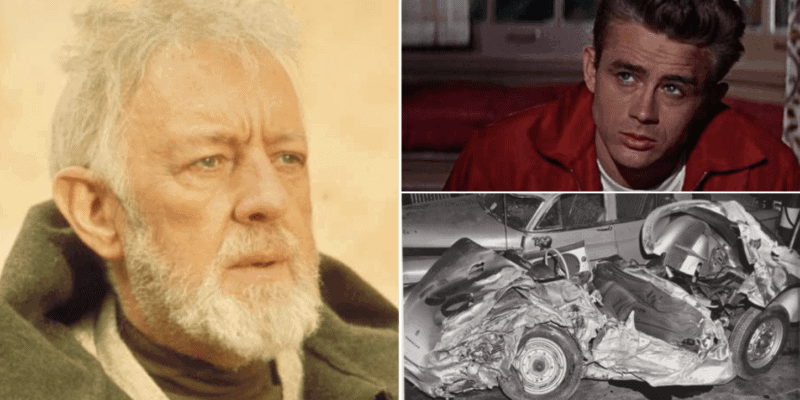 Academy Award winner — and Royal Navy Volunteer Reserve member during the second World War — Guinness had a long career and interesting life prior to beginning his involvement with the Star Wars franchise in the 1970s and 1980s. He acted in such classic films as Great Expectations (1946), Oliver Twist (1948), The Man in the White Suit (1951), To Paris With Love (1955), Lawrence of Arabia (1962), and Doctor Zhivago (1965).

Many years before the Skywalker Saga original trilogy, this, of course, brought the English actor into contact with all sorts of Hollywood stars and starlets during the Golden Age of cinema. At one point, Guinness unexpectedly dined with iconic Rebel Without a Cause (1955) and East of Eden (1955) star James Dean (1931-1955).

Dean famously passed away at the height of his popularity at age 24 in a California car crash, which Guinness, apparently, eerily predicted just a week before it happened. Per Showbiz CheatSheet:

Guinness recalled meeting Dean in 1955, approximately a week before his death. The actor was in Los Angeles and encountered Dean after being turned away from a restaurant.

“I heard feet running down the street, and it was James Dean,” Guinness remembered. “He said, ‘I was in that restaurant, and you couldn’t get a table. My name is James Dean, would you please come and join me?’”

Since Guinness was already a popular actor who had received a 1951 Academy Award nod for The Lavender Hill Mob, it’s likely that Dean knew who he was prior to asking Alec to dine with him. At some point during the meal, Dean showed Guinness his new Porsche Spyder sports car, which he asserted could easily hit 150 MPH.

CheatSheet’s coverage continues with these details from a 1977 Guinness BBC interview:

“I said, ‘Have you driven it?’ and he said, ‘No. I have never been in it at all,’” Guinness recalled. “And some strange thing came over me. Some almost different voice and I said, ‘Look, I won’t join your table unless you want me to, but I must say something: Please do not get into that car, because if you do’ — and I looked at my watch — and I said, ‘if you get into that car at all, it’s now Thursday (Friday, actually), 10 o’clock at night and by 10 o’clock at night next Thursday, you’ll be dead if you get into that car.’”

“And he was dead the following Thursday afternoon in that car,” added Guinness. “It was one of those odd things. It was a very, very odd, spooky experience. I liked him very much, too. I would have loved to have known him more.”

Indiana-born James Dean is now remembered with an annual memorial festival in Fairmount, Indiana, and by fans of Hollywood‘s most glamorous era around the globe. Dean’s death remains one of the most well-known tragedies in Hollywood history.

In a strange twist, Dean is set to appear in the upcoming Magic City Films Vietnam War movie, Finding Jack. A digital double of the iconic actor will appear even though James Dean‘s death occurred 65 years ago.

Oscar winner Guinness’s most famous character, Obi-Wan Kenobi, is set to make his return to the Star Wars universe in the near future thanks to actor Ewan McGregor. McGregor previously played the Jedi Knight as a young man in the prequel trilogy — Star Wars: Episode I – The Phantom Menace (1999), Star Wars: Episode II – Attack of the Clones (2002), and Star Wars: Episode III – Revenge of the Sith (2005) — and is set to return in Deborah Chow’s Disney+ limited series OBI-WAN KENOBI: An Original Series.

Hayden Christensen is also set to return to Star Wars, reprising as Anakin Skywalker/Darth Vader in the show.

What do you think about Guinness’s prediction — or, perhaps, even premonition — that James Dean was going to die?