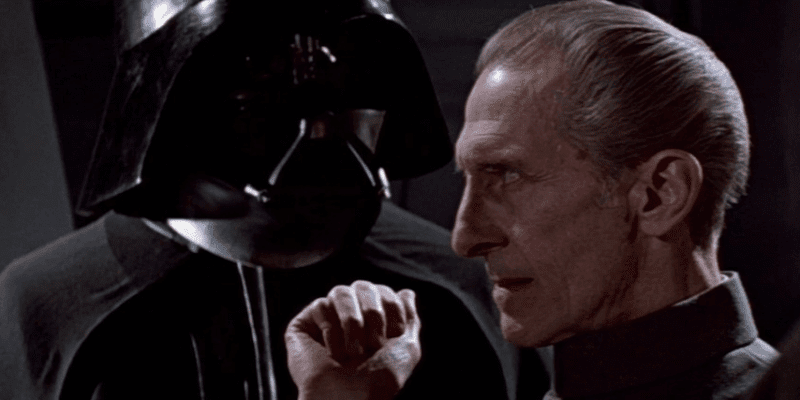 After Darth Vader debuted in Star Wars: Episode IV – A New Hope (1977), it didn’t take long for the Star Wars villain to cement his place in cinematic history.

Between James Earl Jones’s famous voice and David Prowse’s imposing figure, the two original actors behind Darth Vader brought George Lucas’s vision for his villain to life over the course of the original trilogy.

Disney’s first major non-trilogy foray into the Star Wars universe was standalone film Rogue One: A Star Wars Story (2016). The movie introduced characters like Jyn Erso (Felicity Jones), droid K-2SO (Alan Tudyk), and Captain Cassian Andor (Diego Luna) — Andor is set to get his own Rogue One prequel series by the same name.

Now, Lucasfilm’s Industrial Lights & Magic (ILM) animation supervisor, Hal Hickel, has confirmed that Vader and Tarkin were originally supposed to appear together in Rogue One, but the scene was ultimately cut from the film.

On Twitter, Hickel shared a “Rogue One memory” featuring a photo of Darth Vader. When a follower asked, “Was there a scene actually shot here or just this shot for the trailer?,” Hickel replied:

Yes, there was a conversation between Vader and Tarkin that ended up out of the film.

Yes, there was a conversation between Vader and Tarkin that ended up out of the film.

CinemaBlend pointed out why this would have been such an incredible scene for longtime Star Wars fans, had it made it into the final cut of the film:

With the events of Rogue One leading straight into A New Hope, and Grand Moff Tarkin and Darth Vader having worked closely together since the formation of the Empire, it’s not shocking to hear that these two would have conversed in the 2016 Star Wars movie….and if that’s the same giant screen Tarkin intensely gazed at during A New Hope while aboard the Death Star, it stands to reason that Vader visited the destructive space station plenty of times before he brought Princess Leia Organa there.

James Earl Jones reprised his role as the voice of Darth Vader in Rogue One, but Tarkin’s actor, Peter Cushing, sadly died in 1994, so his face was computer generated over Guy Henry’s, much like Mark Hamill’s younger face was digitally mapped onto Jedi Luke Skywalker in The Mandalorian Season 2 finale.

When will we see Darth Vader again?

Fans of Star Wars’ most famous Sith Lord will get to see him in action again sooner rather than later.

The upcoming streaming show is set to take place approximately ten years after the events of Star Wars: Episode III – Revenge of the Sith (2005) and Kennedy promised that fans are in for the “rematch of the century” between the Dark Lord and the Jedi Knight.

Do you wish this cut scene had been left in Rogue One: A Star Wars Story? Are you looking forward to Vader’s return to the Star Wars galaxy?