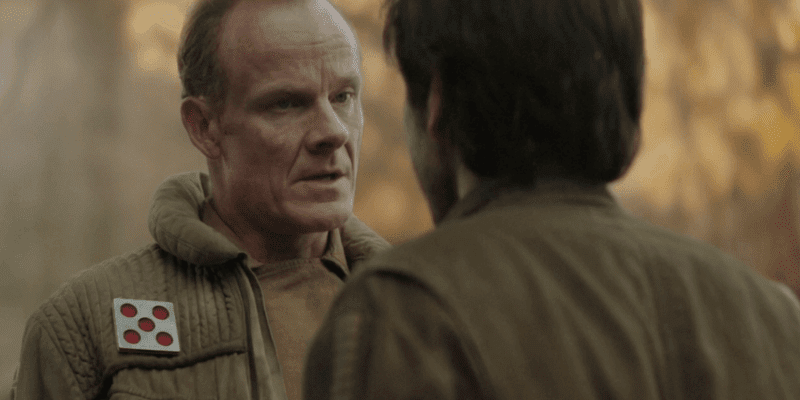 British-born actor Alistair Petrie — General Davits Draven in Rogue One: A Star Wars Story — has spoken to These Are the Actors You’re Looking For host Jamie Stangroom about shooting the Rogue One movie and what’s potentially next for his character in the Star Wars universe.

“Star Wars: A New Hope was the first film I saw in the cinema and I just had two caveats. I wanted a cool name and I wanted a line. Just a line. And then I thought, “Great, I can go to the cinema with my boys and I can sit there and go ‘Bang!'”

Petrie was initially told shooting for his Rogue One character would take “half a day,” and, as he stated in his interview, “It turned into a year!” He added, “I sort of jumped in and I loved it.”

Later in the interview, conversation turned, expectedly, to the Disney+ Rogue One prequel series that is set to follow Cassian Andor’s (Diego Luna) adventures — and misadventures — before the 2016 standalone Star Wars movie.

When asked if there were plans for General Draven to return in the streaming Star Wars show, Petrie said:

“No. It’s possible. Of course, it’s possible because of the role I play in the film. I’m respecting the film makers actually, I’m not trying to be clever in terms of – oh I would love to say something but I can’t, I’ve signed an NDA or whatever – It’s nothing to do with any of that.

If the storytelling allows me to appear in it then I would in a heartbeat because I love the personal and the possibilities of the stories they can tell around Diego’s character, so we’ll see.”

“[the] adventures of Rebel spy Cassian Andor during the formative years of the Rebellion and prior to the events of Rogue One: A Star Wars Story…The rousing spy thriller will explore tales filled with espionage and daring missions to restore hope to a galaxy in the grip of a ruthless Empire.”

At this time, no release date for the Cassian Andor prequel has been released.

Do you hope to see General Davits Draven return to a galaxy far, far away at some point?

Comments Off on Interview With General Draven, Plus Cassian Andor Series Update!