Alan Tudyk Says He Won't Be Back as Beloved K-2SO in 'Andor'...Yet - Inside the Magic 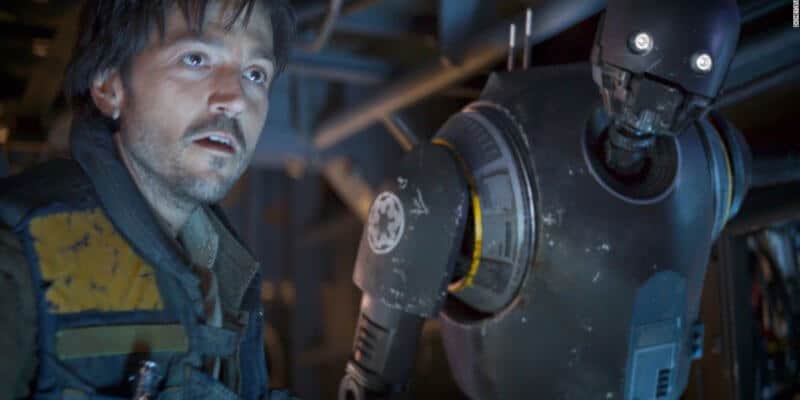 As numerous Disney+ Star Wars series creep closer to their long-anticipated release dates, Star Wars fans are on the lookout for any and all casting news.

Now, on the heels of the first photos of the massive Andor set in England, Rogue One: A Star Wars Story (2016) actor Alan Tudyk (Firefly, I, Robot (2004), A Knight’s Tale (2001)) has confirmed that he will not be back in action as beloved droid K-2SO for the upcoming Rogue One prequel series.

The former Imperial droid — reprogrammed by Cassian Andor to serve the Rebel Alliance instead of the Galactic Empire — quickly became popular due to his dry sense of humor and quick wit. The character is also the subject of an extremely popular Hot Toys sixth scale figure that is known for a unique feature — separate rolling eyeballs.

Per Collider’s coverage of their recent interview with Tudyk:

“They’re shooting it right now, I’m not in it. But, if it stays on the air, stories keep getting told, I’ll end up in there.

Tudyk also joked about his continued involvement in Andor, even though his droid character isn’t in the current storyline:

He also acknowledged that he has been brought out for all of the corporate dog-and-pony shows regardless of his actual involvement: “I’m all these announcements for the show, and I had suggested at D23 when we announced in the show, that it be called K2 Fast K2 Furious: The Cassian Andor Series and, um, that’s not happening, it’s called Andor!”

It’s worth noting that Tudyk effectively confirmed multiple seasons of the Cassian Andor-centric series during this interview. Noting that he is “going to be in the show,” but not in the “first season,” certainly implies that Disney+ has already greenlit at least two seasons of the Star Wars series.

Due to the Star Wars timeline, it is also unlikely that fan-favorite character Jyn Erso (Felicity Jones) will return for Andor, at least in connection to Captain Cassian Andor (Diego Luna). The two did not know one another prior to the Rogue One movie.

At this time, we know Andor will follow Rebel spy Cassian Andor, who is among the Star Wars universe’s most resourceful (and occasionally morally suspect) heroes. Andor — who also goes by various aliases, including Aach, Joreth Sward, Fulcrum, and Willix — is known to go to any length to complete his spy missions successfully.

Although casting details have not been fully revealed, we know that actress Adria Arjona (Pacific Rim: Uprising (2018), True Detective (2015)) recently joined the cast in a leading role and is expected to be heavily featured.

As the Star Wars franchise moves forward, with multiple Mandalorian spinoffs — including Ahsoka, Rangers of the New Republic, and The Book of Boba Fett — animated series like Star Wars: The Bad Batch, and new movies, including a Taika Waititi film and Patty Jenkins’s Star Wars: Rogue Squadron (2023), it is an exciting time for the Star Wars fan base to discover what happens in a post-Skywalker Saga world.

Are you sad K-2SO won’t be in the first season of Andor alongside Diego Luna’s Cassian Andor? What do you think about multiple seasons already being set?