Fans Convinced ‘Star Wars’ Set Photos Are For ‘Andor,’ Not 'Kenobi' - Inside the Magic 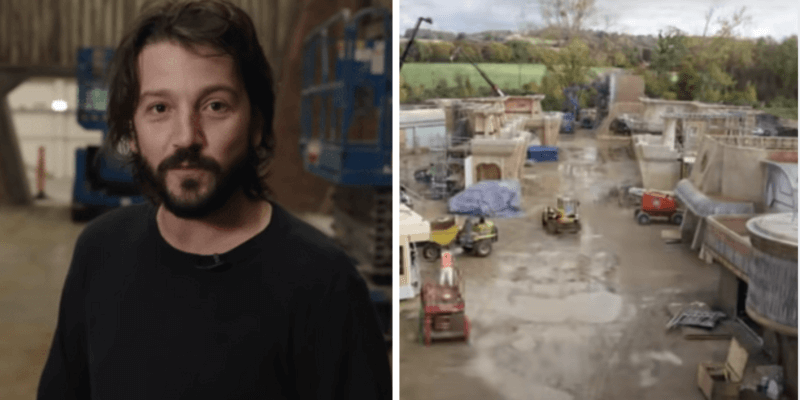 Recently, British publication The Sun — famed for their legal dispute with Pirates of the Caribbean actor Johnny Depp — shared aerial photographs of what they deemed to be the recently-built set for OBI-WAN KENOBI: An Original Series.

Upon further inspection, Star Wars fans have realized that this set may not, in fact, be for the upcoming Deborah Chow series at all. Instead, it appears that they perfectly match the sizzler video for another new Star Wars series, Andor — this is set to feature actor Diego Luna reprising his Rogue One: A Star Wars Story (2016) role as Cassian Andor.

LRM pointed out the following:

Here is the thing. Far as anyone who truly looks into these images are concerned, they are not for Obi Wan Kenobi. When this story broke over the week, I was on Reddit and most of the fans on there are pretty satisfied that the tabloid has the wrong project. Comparison to Andor’s sizzle reel would seem to indicate this massive set is actually being used for Andor, not Obi-Wan Kenobi. We also have to factor in the fact that we think the Obi-Wan Kenobi production only just began in England. Andor is instead further ahead and you can see this for yourself in that very same sizzle reel.

…[The Sun] has revealed pictures of the exterior sets for the upcoming ‘Andor’ Disney+ TV series in the sleepy UK town of Little Marlow, sets that the paper mistakenly attributes to the Obi-Wan Kenobi TV series.

Fantha Tracks have reviewed public records for the site, and we have been able to confirm that the set is in fact for ‘Andor.’ Whilst we won’t publish correspondence we have seen that confirms this as we wish to protect the private contact details of the people involved in the deal…

Given that Ewan McGregor (Obi-Wan Kenobi) himself has confirmed that OBI-WAN KENOBI: An Original Series isn’t set to start filming until March, it does seem unlikely that the set for the series is as large as the set in the drone photos at this time.

Furthermore, the Kenobi series has been confirmed to be filming in Boston, UK, not Little Marlow. This is not to say it couldn’t have multiple filming locations, of course, but Little Marlow has not been named in connection with the Obi-Wan Kenobi show to date.

Andor, on the other hand, as previously stated, is far enough along to have had its teaser revealed at The Walt Disney Company’s 2020 Investor Day event on December 10 — this is further evidence that the built-up Star Wars set is probably for the Rogue One prequel series.

You can view the Andor sizzle reel in full below and compare the scenes in it to the now-controversial aerial set photos for yourself:

Although Andor does not have an official release date at this time and does not appear on Disney’s official 2021 release schedule, the highly anticipated Star Wars prequel series does have the following synopsis:

…[will follow the] adventures of Rebel spy Cassian Andor during the formative years of the Rebellion and prior to the events of Rogue One: A Star Wars Story…The rousing spy thriller will explore tales filled with espionage and daring missions to restore hope to a galaxy in the grip of a ruthless Empire.

Set approximately five years before Rogue One, the prequel will showcase Captain Cassian Andor, one of the Star Wars universe’s most resourceful (and occasionally morally suspect) heroes. Andor, who is also known by various aliases, including Aach, Joreth Sward, Fulcrum, and Willix, is known to go to any length to complete his spy missions successfully.

Although casting details have not been fully revealed, we know that actress Adria Arjona (Pacific Rim: Uprising (2018), True Detective (2015)) recently joined the cast in a leading role.

As the Star Wars franchise moves forward — not only with the Captain Andor-centric show and Obi-Wan Kenobi series — but with Mandalorian spinoffs, animated series like Star Wars: The Bad Batch, and new movies, including Star Wars: Rogue Squadron (2023), it is an exciting time for the Star Wars fan community to see what’s next for a galaxy far, far away after the Skywalker Saga.

Are you excited for Andor? Do you believe these mysterious set photos are actually for Diego Luna’s show?

Comments Off on Fans Convinced ‘Star Wars’ Set Photos Are For ‘Andor,’ Not ‘Kenobi’