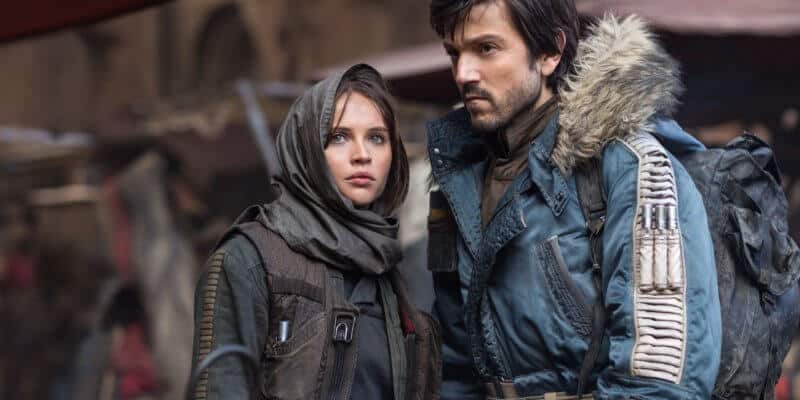 Jyn Erso actress Felicity Jones recently shared that it took an entire week to film a single scene for Rogue One: A Star Wars Story (2016).

Jones shared that one of the Skywalker Saga spinoff film’s most poignant scenes took a solid seven days to shoot. Per CBS-owned ComicBook.com:

…[the scene features] Cassian [Cassian Andor played by Diego Luna] embracing one another as a massive explosion barrels towards them, with Jones recently detailing that the filmmakers were so intent on capturing a specific look for the film, it took them a week to capture one shot.

“We shot it every single evening over a week to get the right light of sunset, to get the perfect pink light, so we knew that scene inside out by the end of the week,” Jones recently explained to The Hollywood Reporter. “It was just amazing to see how it morphed and shifted and changed. We shot that film in a very visceral, naturalistic, gritty way, which I think is why so many people responded to it. I think they loved that it felt so real and had elements of the ’70s Star Wars films that had that similar feeling of naturalism and reality.”

In another interview with The Hollywood Reporter, Jones shared that she feels there is “unfinished business” for Erso in the Star Wars universe, even though the character died in Andor’s arms during the Death Star blast in the aforementioned scene.

“I just keep saying that reincarnation is totally possible in the Star Wars universe,So, I feel there’s unfinished business for Jyn, for sure. I think it would be fascinating to see her getting older and wiser and fighting the dark forces in the universe, of which there are many it seems.”

What’s next for the Rogue One characters?

The Rogue One prequel Andor is set to be one of Lucasfilm’s 11 upcoming Star Wars series on the Disney+ streaming service. Although the series, which will follow the adventures of Rebel spy Cassian Andor — in a role reprised by Luna — has been in production for some time, it has faced numerous pandemic-related delays and does not have an official release date.

At Disney’s 2020 Investor Day event on December 10, Lucasfilm President Kathleen Kennedy gave Star Wars fans a first look at the series with a sizzler video, which can be viewed in full at the end of this article.

Andor will follow Luna’s popular character approximately five years before Rogue One: A Star Wars Story begins, so it’s unlikely that Jones will reprise her role as Erso in the series since the two did not yet know one another at that time in the Star Wars timeline.

At this time, few roles have been confirmed, but we do know that actress Adria Arjona (Pacific Rim: Uprising (2018), Emerald City (2017), True Detective (2015) will be a major character in Andor.

Are you looking forward to Andor? Do you hope to see Jyn Erso come back to Star Wars someday?