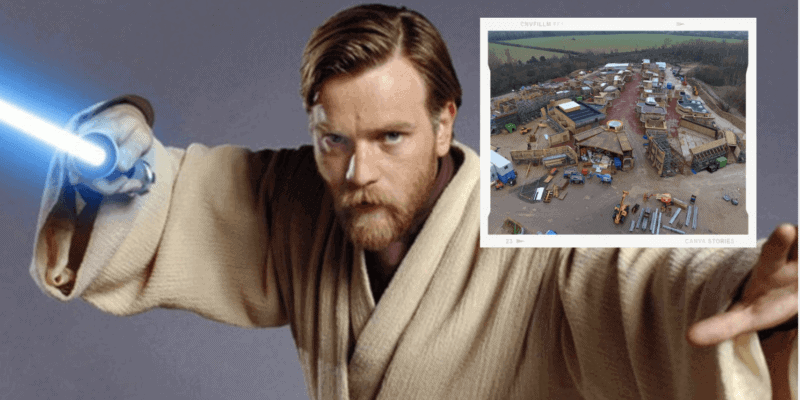 Production for the highly-anticipated Disney+ streaming show OBI-WAN KENOBI: An Original Series is finally getting underway.

While this might sound like a good thing, it’s actually causing quite a stir for residents who live near one of the sets for the upcoming Deborah Chow (The Mandalorian) Star Wars series.

Furious villagers have slammed Star Wars bosses after a massive film set for a new spin-off series starring Ewan McGregor arrived at an abandoned quarry – and could stay there for three years.

Disney has set up a huge set in Little Marlow, Buckinghamshire, to film the upcoming Star War spin-off TV series about Obi-Wan Kenobi…

Reportedly, villagers, who are used to a quiet, rural lifestyle are concerned that the set — which looks to be massive — could wreak havoc on area wildlife who live near the quarry where the set was erected and upend their bucolic daily existence.

One source told The Sun: ‘This is a massive production and a hugely lucrative franchise – but obviously not everyone locally is pleased to see Disney moving in.

‘It might generate some jobs, but this is a pretty rural area which has always been quiet and peaceful – the thought of turning it into some sort of intergalactic war zone to make TV shows is horrifying.

‘The set is massive, with great big buildings on it alongside loads of heavy duty machinery coming and going – it’s just totally out of keeping with the countryside vibe here and people are up in arms about it.’

Some villagers are none to happy about a slice of Hollywood arriving at their doors.

Instead they have raised concerns over lighting, noise, traffic and the impact on local wildlife.

The series, which is set to follow Jedi Master Obi-Wan Kenobi (Ewan McGregor) approximately ten years after the events of Star Wars: Episode III – Revenge of the Sith (2005) and prior to the story of Star Wars: Episode IV – A New Hope (1977) — in which fans were first introduced to Luke Skywalker (Mark Hamill), Princess Leia (Carrie Fisher), and Han Solo (Harrison Ford) — has the following official synopsis:

Tatooine, a desert planet where farmers work hard under the heat of two suns. Meanwhile, they try to defend themselves and their loved ones from the Tusken marauders. A planet behind the edge of civilization. And a place where it would be unlikely to find a Jedi master, or an orphan child [Luke Skywalker] on whom the future of the entire galaxy weighs on its small shoulders.

Details about the plot of OBI-WAN KENOBI are vague at this time, but Lucasfilm President Kathleen Kennedy did confirm that Hayden Christensen will be reprising his prequel trilogy role as Anakin Skywalker/Darth Vader during Disney’s 2020 Investor Day event. There are also reports that Temuera Morrison — who is also currently playing Boba Fett in The Mandalorian saga — is set to appear as clone Commander Cody in the Kenobi series.

Furthermore, actress Naomi Scott — who portrayed Princess Jasmine in Disney’s live-action adaptation of Aladdin (2019) — has been attached to the project as the female lead opposite McGregor in the long-awaited Kenobi series. While few details about Scott’s potential role have been revealed at this time, we do know the working name for the character is “Riley” and she could possibly have some connection to Mandalorian culture.

“Riley” could very well end up being another Mandalorian for Obi-Wan to meet on his journey, or even have some connection to Obi-Wan’s romantic interest Duchess Satine [in animated series Star Wars Rebels].

An official release date for the limited series has not been announced, but it is not on Disney’s 2021 release schedule. Only two Star Wars series are currently slated to release on Disney+ this year — Star Wars: The Bad Batch and The Book of Boba Fett.

Visit The Sun to see all of the images of the OBI-WAN KENOBI: An Original Series set.