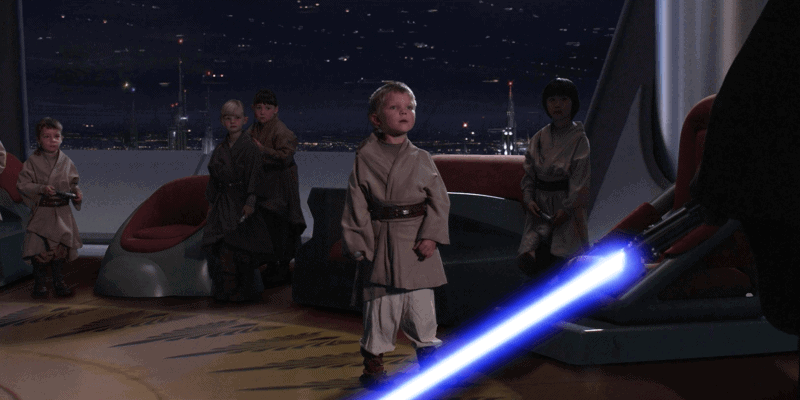 Regardless of what your personal feelings are about the Star Wars prequel trilogy — Star Wars: Episode I – The Phantom Menace (1999), Star Wars: Episode II – Attack of the Clones (2002), and Star Wars: Episode III – Revenge of the Sith (2005) — there are very few Star Wars fans who won’t acknowledge how emotional it is when Anakin Skywalker (Hayden Christensen), well on his way to becoming Darth Vader, kills an innocent group of younglings at the Jedi Temple on Coruscant.

Now, Ross Beadman, the actor who played the famous blond-haired youngling who speaks to Anakin during the Great Jedi Purge — more infamously known as Order 66  — has shared details about his time on the Revenge of the Sith set.

Englishman Beadman, who never continued his acting career, and is now in his early 20s, answered hundreds of fan questions on Reddit recently. One of the first things he was asked was whether or not the role impacted his popularity going through school.

Yes and no. It was annoying as I was known as the Star Wars kid rather than a guy that just happened to be in Star Wars and there was teasing etc. Overall though, I think it gave my popularity a boost because people liked the movie in general.

Related: Did The Child Cause One of ‘Star Wars’ Most Heinous Acts?

Although Beadman didn’t end up becoming a professional actor, over the years, he has come to realize what an important role he played in one of cinema’s most iconic franchises. Reddit user RedhatJoe asked:

When Revenge of the Sith was filmed, did you realize the gravity of the scene you were a part of and Anakin’s murder of children? Also, when did you first see Revenge of the Sith, and what did you think of it and of your part in it?

Not at all. When I just finished seeing the premiere I thought it was an off-the-cuff decision to keep me in…I didn’t even expect to be put into the film at all.

Only with the recognition it’s gained recently have I began to see its importance as well.

The child actor — who performed alongside the likes of not only Christensen, but Grand Master Yoda (Frank Oz) and famed Jedi Obi-Wan Kenobi (Ewan McGregor) — also noted that the death of the young Padawans was “kept from us until we saw the premiere.”

Many fans wanted to know about the startled back-step that has become a hallmark of Beadman’s Star Wars scene. Redditor Qianyu Reeves wrote:

What was with the little tumble back you did? It looks like a sort of accidental twitch that they liked so they went with the take but i’m wondering how much of that was what George asked for

From what I remember Hayden shouted “boo!” and that startled me to add to my fear in the scene

From the sounds of it, Christensen’s descent into Darth Vader was truly memorable — even for the other actors on the Star Wars set! Talk about method acting.

Fans reading the Reddit question and answer thread loved this response, with many noting how much they loved Beadman’s portrayal of the scared youngling.

Walked With a Zombie shared:

…that was really clever of Hayden, your scene always stuck out to me because of that back step seems like real fear of the lightsaber being ignited. Really cool AMA man cheers!

I really think the startle sells the whole scene.

I always wondered if you where told to do that, or if maybe the character knew what was happening.

One of my greatest Star Wars questions have finally be answered.

Recently — thanks to The Mandalorian Season 2, Episode 5 (“Chapter 13: The Jedi”) — the Jedi Temple on Coruscant has been back in Star Wars news.

Star Wars Rebels and Star Wars: The Clone Wars fan-favorite Ahsoka Tano (Rosario Dawson) made her live-action debut in the second season of The Mandalorian and shared that Grogu (AKA Baby Yoda AKA The Child) was present when  Palpatine executed Order 66.

This has, of course, led to a variety of questions for fans — such as whether or not the talented Force user could have prevented Anakin’s slaughter of the children — but we do not have all of the answers yet. More about Grogu’s murky backstory may be revealed in The Mandalorian Season 3 or one of its spinoff series.

The highly-anticipated Obi-Wan series is not currently on Disney’s 2021 release schedule, so the Star Wars fan community will probably have to wait until 2022 for its debut. There is much to look forward to as the Star Wars franchise continues to expand on Disney+, with at least 11 new Star Wars series in the works.

What do you think about this behind-the-scenes look at one of Revenge of the Sith’s most famous moments?