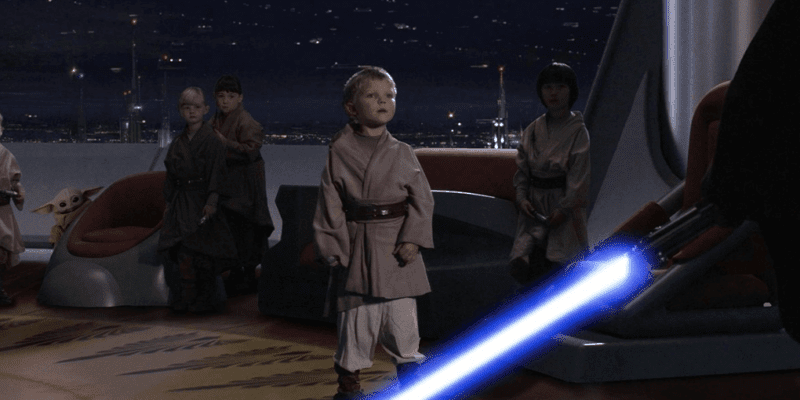 There are few moments in the entire Star Wars canon worse than watching Anakin Skywalker wield a lightsaber against a group of younglings in Star Wars: Episode III – Revenge of the Sith.

The scene plays to our emotions — as parents, as people, and even as fans of the franchise — and impacts every viewer a bit differently, but intensely, nonetheless.

Now, we know that it is possible that The Mandalorian’s most popular character The Child (Grogu) was present for this heinous act. In this week’s installment of the Disney+ Star Wars series — Season 2, Episode 5 (Chapter 13: The Jedi) — Ahsoka Tano (Rosario Dawson) shares this information about the foundling’s past with Din Djarin (Pedro Pascal):

“Grogu and I can feel each other’s thoughts. At the end of the Clone Wars when the Empire rose to power, he was hidden. Someone took him from the Temple [the Jedi Temple on Coruscant]. Then his memory becomes… dark. He seemed lost. Alone.”

Grogu’s backstory is undoubtedly sad and unfortunate — and could potentially play a major role in whether he ultimately chooses to follow the dark side or the light side of The Force — but, could he have actually abandoned the room full of doomed younglings Anakin Skywalker killed as he spiraled into becoming Darth Vader?

…even if the Child was at the temple when his fellow younglings were murdered by Anakin Skywalker, he was a lot smaller than his former friends. Also, his Force powers might not have been at their best at that time.

Many are under the assumption that something pretty dark happened at that point in his life, which has been hinted at more than once. In addition, we’ve already seen some of that darkness when the Child was obtained and experimented on in The Mandalorian season 1. It appears that Moff Gideon wants some of the elements that make up the Force [Gideon (Giancarlo Esposito) is likely in need of the midi-chlorians in Grogu’s blood) and believes he can get them through the Child.

The following meme that has been making the rounds online shows Grogu inserted into the scene in question. Twitter user Harri Elmer shared the fan edit with the caption:

The more Jon Favreau, Dave Filoni, and the rest of the Mandalorian creative team explore “Baby Yoda’s” backstory, the more complex the situation becomes — although we know few details right now, there is clearly much more to the adorable character than meets the eye.

What do you think? Could Grogu have prevented Anakin’s slaughter of the younglings or was he even at the Jedi Temple at the time at all?

Comments Off on Did The Child Cause One of ‘Star Wars’ Most Heinous Acts?