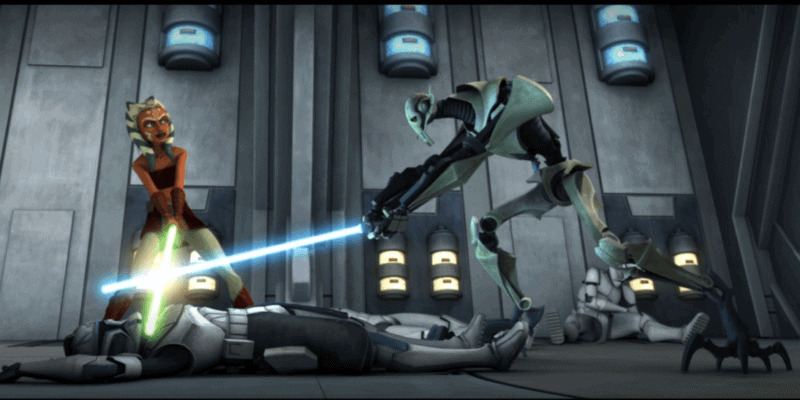 When Anakin Skywalker’s Padawan Ahsoka Tano (voiced by Ashley Eckstein/portrayed in live-action by Rosario Dawson) made her live-action debut in The Mandalorian Season 2, Episode 5 (“Chapter 13: The Jedi”), fans went wild and the reception to the popular character was overwhelmingly positive.

Kryze was heavily involved in the Darksaber storyline, which is expected to continue into The Mandalorian Season 3 since Kryze did not successfully win the black-bladed lightsaber in battle. Instead, Djarin himself obtained it, making him de facto ruler of Mandalore.

Now, it seems that fans of Star Wars: The Clone Wars may have more to look forward to as the Mandalorian saga moves forward. Two interconnected spinoffs — Ahsoka and Rangers of the New Republic — were confirmed during The Walt Disney Company’s 2020 Investor Day event.

A third supplemental spinoff, The Book of Boba Fett, was later announced during The Mandalorian Season 2 finale. The Mandalorian is quickly becoming the epicenter of the Star Wars franchise and a great deal of new Star Wars content is set to revolve around the popular show. For example, it was recently confirmed that Mandalorian character Fennec Shand (Ming-Na Wen) will also be in the new animated series, Star Wars: The Bad Batch.

Rumors are swirling that the Ahsoka series, quite reasonably, will be of particular interest to the Clone Wars fan community. A new report from Kessel Run Transmissions indicates that fan-favorite clone character Captain Rex — later Commander Rex — is set to appear in the spinoff show.

…[KRT] hints that Lucasfilm wants to build on the momentum. They say that Rex’s armor was present at a test screening and that Tempura Morrison participated on set. So, there’s a lot to unpack there, but this is an unqualified win for fans of Clone Wars and Rebels. Everything circulating now points towards those shows having a raised profile in the beginnings of this Star Wars TV show era

There is a chance that Rex will join forces with Tano as an extension of a Rebels storyline as she searches the galaxy for Grand Admiral Thrawn (voiced by Lars Mikkelsen/rumored to be played in live-action by Robert Downey, Jr.) and Ezra Bridger (voiced by Taylor Gray).

This story arc was introduced during Tano’s initial appearance in The Mandalorian when she defeated Corvus Magistrate Morgan Elsbeth (Diana Lee Inosanto) in a beskar spear and lightsaber showdown.

No details about Rex’s potential appearance have been confirmed by Lucasfilm. If this report is true, it will be the fourth Star Wars series that Temuera Morrison — who played Jango Fett in the prequel trilogy and returned as bounty hunter Boba Fett in The Mandalorian Season 2 — is set to film in the near future.

He is also rumored to be playing clone trooper Commander Cody in OBI-WAN KENOBI: An Original Series and reprising Boba Fett in both The Book of Boba Fett and The Mandalorian Season 3.

For those unfamiliar with Rex, Wookieepedia has shared this brief biography:

Rex, formerly designated CT-7567, was a veteran Clone Captain, Clone Commander, and Advanced Recon Commando who commanded the Grand Army of the Republic’s famed 501st Legion of clone troopers during the Clone Wars. Rex later served as a captain and commander within the Alliance to Restore the Republic during the Galactic Civil War. Rex participated in many battles over the course of the Clone Wars. As the captain of the 501st, Rex served as second-in-command to Jedi General Anakin Skywalker, whose bravery and unconventionality in battle he came to share. In addition to being a close friend of Skywalker, he also became friends with Skywalker’s apprentice, Ahsoka Tano. He was close with Marshal Commander Cody…

You can watch the full Kessel Run Transmissions video below:

Are you among the Star Wars fans who would be thrilled to see clone Captain Rex make a live-action appearance as the Star Wars franchise adds Clone Wars and Rebels storylines beyond animated series?