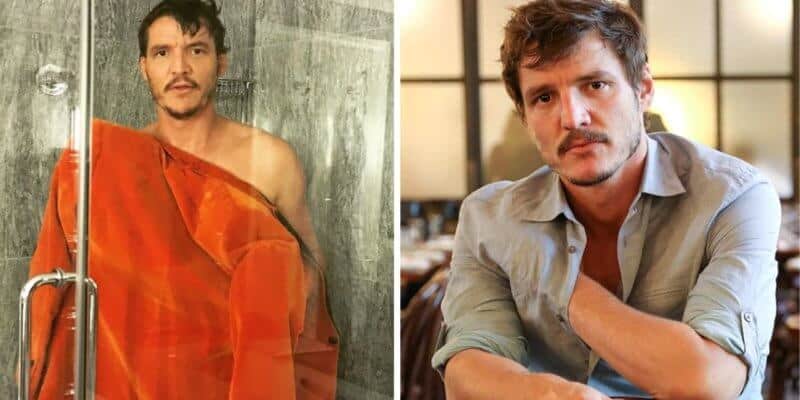 If you have watched even a single episode of Jon Favreau and Dave Filoni’s The Mandalorian, you may have noticed that Din Djarin (Pedro Pascal) has a very calm, smooth voice — and it’s not just thanks to the voice modulator in his beskar helmet. It seems in fact, that Pedro’s trick to the unique voice isn’t as G-rated as viewers may think.

In The Mandalorian Season 1, Episode 3 (“Chapter 3: The Sin), we discover that Din follows the Way of the Mandalore and therefore, will not remove his helmet. Due to this, for the majority Din’s screen-time in the first two seasons of the series, he is almost always wearing his mask, leaving his character more recognizable when fully dressed in his beskar armor than when his face is exposed.

Interestingly enough, this has left actor Pedro Pascal with a lot more adult fans as opposed to children, which may be for the best.  In a video chat with Josh Horowitz on his Stir Crazy series for Comedy Central, Pascal noted that when parents spot the actor and want to showcase him to their Star Wars loving children, the kids don’t recognize him. Pedro explains the reality as, “But then it’s like my face, and I don’t have the child with me, I’m not wearing a helmet, and they look and they’re like, ‘Who’s this guy?”

There is, however, one quality that would convince even the most skeptical fan that he is, in fact, the Mandalorian in question — his voice. That being said, using it to have kids recognize the actor is a non-starter for Pedro. Just as James Earl Jones had to undergo specific voice training to create the perfect voice for Darth Vader through a mask, Pedro had to do the same for Din. But, according to Pedro, when the mask comes off, things get a little too ‘bow chicka wow wow’ for his liking.

Pedro detailed to Horowitz that he can’t use the voice as proof of his character because it is “strangely like a bedroom voice. Totally inappropriate.” Considering Din has not had any romantic attachments in The Mandalorian — he even shut down what this reporter was secretly hoping to be a romantic interest with Sorgan villager, Omera, in Season 1, Episode 4 (“Chapter 4: The Sanctuary”)) — imagining that under his helmet Pascal is channeling his ‘bedroom’ voice is hilarious. Personally, I may never be able to listen to him say “This is the way” without chuckling like a teenager again.

Luckily for Pedro, Din’s helmet voice has a different sound and tonality from his regular voice for the few moments that we do get to hear him speak in the show. In Season 2, Episode 7 (“Chapter 15: The Believer), we both see and hear the actor without his helmet for the first time with another human — he previously removed his Mandalorian helmet in front of droid IG-11 (Taika Waititi) — and the conversation seems to steer clear of pillow talk.

With Season 3 of The Mandalorian confirmed, it looks like Pedro will have to continue honing in on what he deems to be his seducing bedroom sound. That being said, we do not currently have a premiere date for the season as it was not on Disney’s 2021 release schedule.

Where did we leave Din Djarin?

Although we may not know when the third season will air, we do know that it is confirmed, and the show’s storyline currently has many loose ends that must be tied together. Recently we reported that in the season finale of The Mandalorian Season 2, Episode 8 (Chapter 16: The Rescue), we see Din Djarin (Pedro Pascal), Cara Dune (Gina Carano), Boba Fett (Temuera Morrison), Fennec Shand (Ming-Na Wen), Bo-Katan Kryze (Katee Sackhoff), and her Nite Owl warrior Koska Reeves (Mercedes Varnado) defeat Moff Gideon (Giancarlo Esposito), rescuing Grogu from the Imperial ship.

Din completes his mission of returning the foundling to his rightful place with the Jedi, and all is right when Luke Skywalker (CGI Mark Hamill) enters the ship destroying everything in his path before arriving to collect Grogu for his Jedi training.

Now, many viewers may be wondering who is going to be titled the true ruler of New Mandalore. Considering one of Bo-Katan’s requests for helping Din rescue Grogu was to earn back the Darksaber — and, as a result, title as leader of Mandalore — we were left with Din unable to hold up his side of the bargain.

Of course, this is not out of any craving for power on Dins part, but rather because Din himself earned the black-bladed Darksaber when fighting with Gideon and is now the rightful owner — and therefore, ruler of Mandalore — something he did not know would occur.

Are you now just imagining what Pedro’s face looks like under his helmet when he speaks in his ‘bedroom voice’ as Din? Let us know how hard you laughed about Pascal’s vocal description of his character.