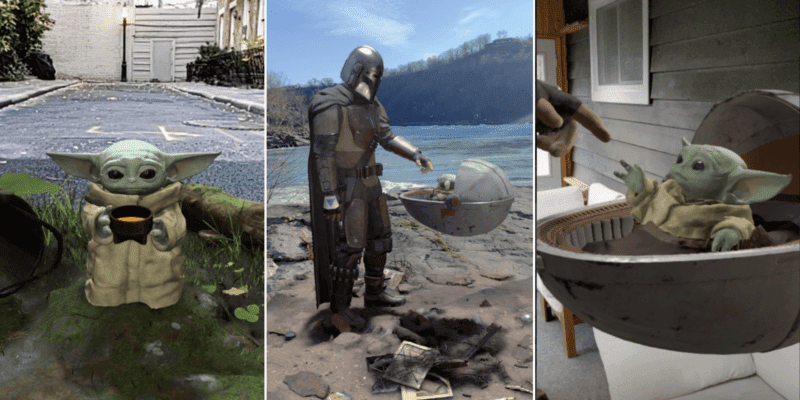 During the 2020 holiday season, Google added Grogu (AKA The Child AKA Baby Yoda) to their line-up of AR objects through the Google search engine platform. To experience this particular Mandalorian augmented reality feature, you merely need to have access to an iOS or Android device with a supported operating system.

Now, the Google team has taken things one step further with a new app — Star Wars: The Mandalorian AR Experience — available exclusively on the Google Play store. Above, you can see the loading screen for the interactive smartphone app, which allows users to bring Din Djarin (played by Pedro Pascal in the hit Disney+ series) and Grogu into their homes like never before.

According to the Google Play Store description:

“The Mandalorian”‘s adventures arrive in your reality with this all-new immersive AR app. Become a bounty hunter and bring the world of “The Mandalorian” to life in your own space. Interact with characters and discover hidden features as you bring scenes from Season 1 to life. Retrace “the Mandalorian”‘s steps, find the Child, and harness the Force, all featuring life-sized versions of your favorite characters. Explore. Capture. Share.

Once users download the Star Wars AR application and click the “Begin” button in the previous screenshot, they will see a screen similar to the one below. This shows all of the AR scene options that are currently available. Since the app debuted in November, Google has regularly been adding new 3D scenes and experiences, including “Bounty Tracking” featuring Djarin.

Google shares these details regarding compatibility:

Google, Disney, and Lucasfilm teamed up to bring the world of “The Mandalorian” to life in AR. “The Mandalorian” AR Experience is available only on Google Play for 5G Google Pixels and other select 5G Android phones, with new experiences dropping weekly starting November 23.

“The Mandalorian” AR Experience will only work on 5G Google Pixels and other select 5G Android phones that have Google Play Services for AR updated. For more information about compatibility, go here.

It also remains unclear if iPhone users will ever be able to download a similar app for iPhone or iPad from the Apple App Store or if Android users who use non-Google phones will ever gain access to this application.

There is also the potential for something like this to come smart glasses, like the Star Wars: Tales From the Galaxy’s Edge virtual reality video game, but again, nothing has been confirmed about whether or not the Mandalorian AR Experience app will be rolled out on additional platforms.

Related: Profiles in History to auction off R2-D2 remote control robotic character from the Disney Parks

At this time, it is unknown if other Mandalorian characters — such as Cara Dune (Gina Carano), Bo-Katan Kryze (Katee Sackhoff), Koska Reeves (Mercedes Varando/Sasha Banks), Ahsoka Tano (Rosario Dawson), Boba Fett (Temuera Morrison), or Fennec Shand (Ming-Na Wen) — will be added to this augmented reality app as new seasons and series debut within The Mandalorian saga.

Showrunner Jon Favreau and executive producer Dave Filoni are currently developing The Mandalorian Season 3 and three spinoff shows — Ahsoka, Rangers of the New Republic, and The Book of Boba Fett. Only The Book of Boba Fett appears on Disney’s 2021 release schedule at this time.

What do you think about this super cool, completely immersive Mandalorian AR experience? Are you going to bring the beskar-clad bounty hunter and Grogu into your world?

Comments Off on Google Brings ‘The Mandalorian’ to Life With Incredible AR Experience!