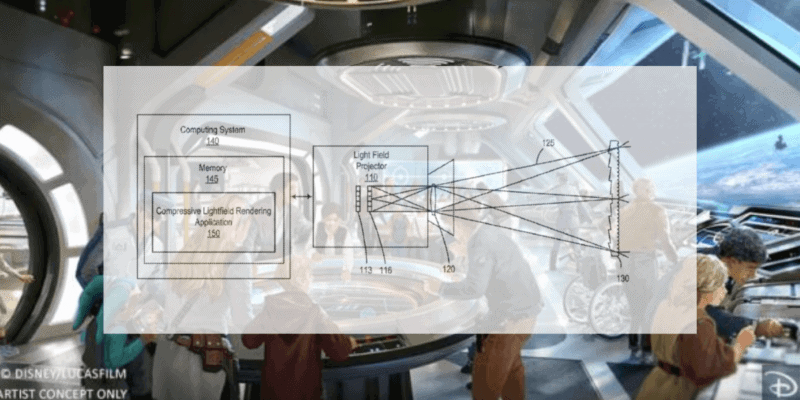 The Walt Disney Company has filed new patents that could be related to augmented reality. This is not the first patent the Disney company has filed relating to this type of technology.

You can look at the latest patents in full here. You can see from the abstract of the patent that it explains a light projection through micro-mirrors. While there is no full indication of what this particular patent could be for, it is interesting. What we do know is that projection and lighting effects are often used on attractions inside the Disney parks, like the ghost effects found at The Haunted Mansion.

The next patent is very interesting. It is a fully immersive system, but what could it be used for? Our guess? The Star Wars hotel that is set to open for Disney World’s 50th Anniversary Celebration in 2021. Set to give Guests an experience like never before, could this new technology be used at the Galactic Starcruiser hotel? It is certainly a possibility.

Here is what the technology looks like. It appears to be an entire system that can be installed in a ceiling:

The third out of the four patents appears to be mainly for testing purposes. You can look and read through the entire patent here.

While that patent was more abstract than the other two, there is still one left!

This last one is a little more straightforward. It is a player to synchronize the playing of media. Not exciting, per se, but could it could be instrumental in a smooth and immersive experience for Guests.

So, what do you think? does looking at this future technology get you excited for future experiences at Walt Disney World? Let us know in the comments!

Subscribe to our newsletter below to be kept in the loop for all the latest Disney news!