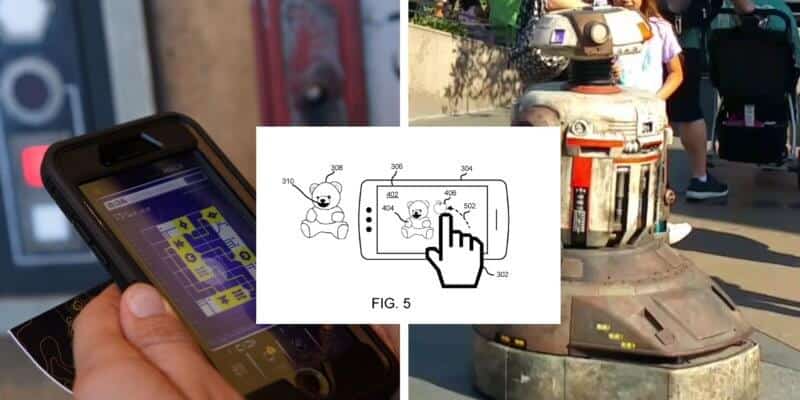 How cool would it be if Disney was creating a phone feature that would allow you to control animatronics throughout their theme parks using augmented reality?

Disney has filed a new patent, and it appears that it’s going to allow Guests to take control of reality. The new patent states that it is “for synchronizing real world motion of physical objects with presentation of virtual content”, and if that sound confusing to you, this is a fancy way to describe augmented reality.

Augmented reality, according to Wikipedia is, “an interactive experience of a real-world environment where the objects that reside in the real world are enhanced by computer-generated perceptual information, sometimes across multiple sensory modalities, including visual, auditory, haptic, somatosensory and olfactory.” This is something we have been seeing in video games, a popular example being ‘Pokemon GO’.

What AR does is allow the user to use their real world environment, but inserts fictional or predetermined objects and characters into your view, blurring the line between what is based in reality and what is not. Disney has actually already done this with Mickey and Minnie’s Runaway Railway AR game, where players can race through scenes of the Hollywood Studios attraction. In the game, though, the scenes from the ride are overlaid on the players’ current surroundings — like their living rooms!

Although we have yet to discover where exactly this technology is being developed for use, it is fun to imagine all of the possibilities. With Disney Parks being hit heavily by the pandemic at the moment, and many Guests not being able to travel or visit their favorite parks, the Walt Disney Company could very well be creating ways to bring Disney magic home.

What could this patent be for?

During a discussion on the patent, fellow ITM writer Rebekah shared that perhaps this is something in line with placing Disney objects and characters in photos, as you can see below!

Another fun idea would be to implement this in the theme parks. The thing that struck me that made this patent seem different was the fact that in the below figure, the example being provided is allowing the user to affect real life/outside world objects, through an augmented object on their phone. Augmented reality typically imposes itself on the real world but can’t physically effect it. This figure however, shows it to be doing the opposite, with the bear which is a real object, is opening it’s mouth because of the ‘fake’ apple being put in it’s mouth by the AR object on the phone.

It would be pretty fun to be running around Disney World, and interact more with the lands you are in, similar to what we are able to experience at Star Wars: Galaxy’s Edge through the Disney Play app.

For now, we will just have to sit patiently as we await to see what this new technology and patent could lead to!

What do you think this patent will be used for?