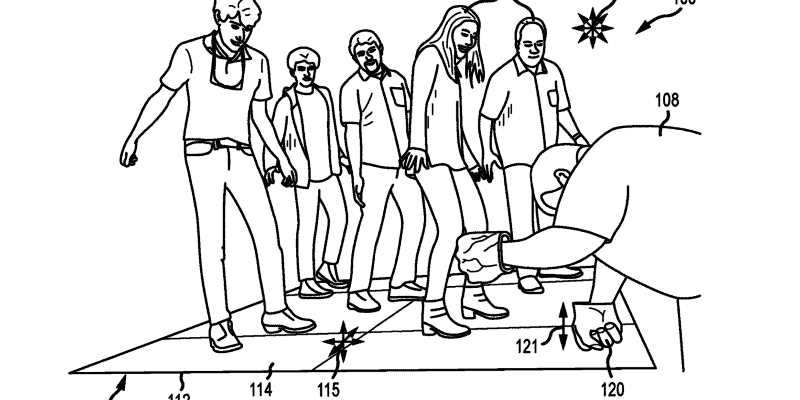 After filing a recent patent, it appears that Disney is getting ready for a new ground-shaking experience. No, really, they want to cause the floor beneath your feet to shake.

According to the patent:

A haptic floor system is provided that produces large vibration-based effects through the use of one-to-many panel or plate assemblies that can each be selectively operated by a controller in a programmed manner or in response to sensor outputs. Each of these panel or plate assemblies may be labeled a “quake plate assembly” as the special effect delivered by the haptic floor system can provide a person supported by one of the quake plate assemblies with ground trembling and vibrations similar to that felt in an earthquake or when a super strong fictional character strikes the floor nearby or a large animal or robot walks or runs by the person. Each quake plate assembly may include a thin plate or panel with an upper contact surface for supporting people or objects and an opposite lower surface, and one-to-many actuators may be provided on the lower surface of the thin plate.

In short, this new patent secures would be used to simulate tiny earthquakes. But looking further at these sketches, we can deduce something else. The use of the Hulk Hand toys sold for kids and the use of phrases like”when a super strong fictional character strikes the floor nearby or a large animal or robot walks or runs by the person,” or “Monster Step” suggests this could be used for Marvel.

Speculation Time: Could This Be For Marvel’s Avengers Campus?

Disney has continued to up the ante with its immersive experiences. Until now, that level of immersion has peaked with Star Wars: Galaxy’s Edge, and especially the attraction Star Wars: Rise of the Resistance. In fact, in the section of the patent titled “Relevant Background,” it states: “Often, it is desirable for the experience to be immersive and hands on, and, if possible, it is desirable to deliver entertainment that is not available outside that particular theme or amusement park.”

But Disney has suggested one new land will be even higher on the immersion scale: Avengers Campus in Disney’s California Adventure.

From the talk at D23, and the announcement of the Spider-Man stuntronic, to our new insights into the hiring processes. Avengers Campus looks to be a super immersive experience where having the ground you’re standing on shaken by a passing Hulk or alien, doesn’t seem too far-fetched.

What do you think this ground-shaking technology will be used for? Let us know in the comments!