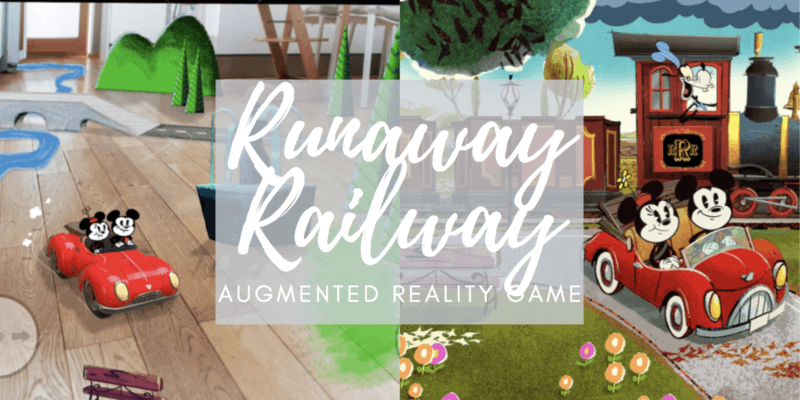 If you suffer from the Disney blues (and don’t we all!), wishing you could experience your favorite Disney Parks attractions even after you get home, you’re in luck. The Walt Disney Company has just released a brand new smartphone virtual reality game called Mickey and Minnie’s Runaway Railway: Adventure Kit.

The Disney augmented reality game is based on the Mickey and Minnie’s Runaway Railway attraction that opened in March at Disney World’s Disney’s Hollywood Studios. The first Mickey Mouse-themed attraction at any Disney theme park was open for just 16 days before the temporary closure of Walt Disney World Resort took effect.

Thanks to this new game, however, you can bring the magic home like you’ve never been able to before! The new AR game can be accessed for free in the DisneyNow app. Users can choose from three characters (Mickey, Minnie, and Goofy) and three worlds (Runnamuck Park, Big City Snarl, and Carnival Chaos).

Each setting is taken directly from the Runaway Railway attraction, so you can truly relive the ride at home!

Disney’s official concept art for the Runaway Railway augmented reality game shows Mickey and Minnie in their car from the Disney Parks attraction, driving around the user’s house! The detailed game will allow you to immerse yourself in Mickey and Minnie’s world from the Hollywood Studios ride without leaving home.

If your phone isn’t an iPhone or Android that is ARKit or ARCore compatible, you can still enjoy Mickey and Minnie’s Runaway Railway: Adventure Kit in non-AR mode. There’s even a racing game that features Mickey Mouse, Minnie Mouse, and Goofy in this version of the game.

This augmented reality addition to the DisneyNow app begs numerous questions about Disney’s use of AR going forward. There is certainly potential for the Disney Parks team to allow Guests to relive their favorite Disney theme park memories from the comfort of home.

Have you tried Mickey and Minnie’s Runaway Railway: Adventure Kit yet? Which room of your house are you going to turn into the Hollywood Studios attraction first?

Get Ready to Go Back to the Parks!

To plan your triumphant return to Walt Disney World or any other Disney location, contact the Authorized Disney Vacation Planners at Academy Travel! Their team can help you plan every detail of a Disney trip to any of the Walt Disney Company’s properties.