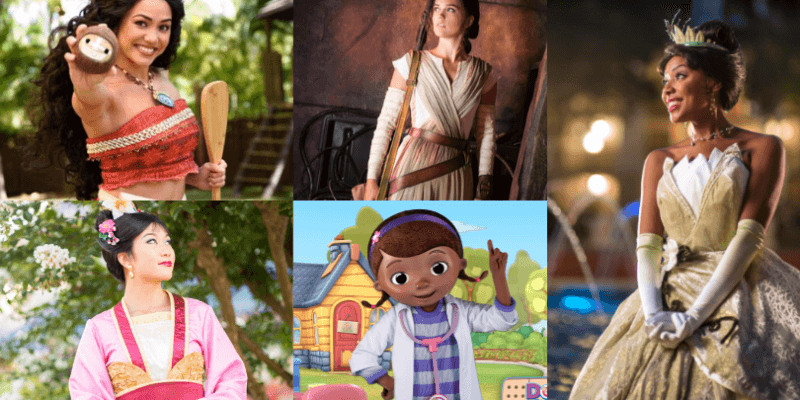 Whenever we visit Disneyland Resort, Walt Disney World Resort, or any of the other Disney Parks worldwide, one of our favorite parts of our Disney day is meeting characters. And as the years go by and more new Disney shows and movies are released, it becomes abundantly clear that some of the strongest role models are present at the Disney Parks.

We love the classic Disney characters, from the true original Mickey Mouse to the ultimate fairy tale princess Cinderella. But when it comes to the characters we look up to most, we often turn to the Disney heroes who are paving the way for future world-changers: Mulan, Tiana, Moana, and Rey.

Moana is one of our favorite Disney Princesses. Even though she goes against her parents’ wishes by leaving her small island of Motunui, Moana never lets anyone tell her how far she’ll go. She embarks on a heroic journey and brings peace and wisdom to her people, who had forgotten their adventurous spirits. She shows people of all ages and genders that they can accomplish so much more than they are expected to.

Moana makes appearances at Disney Parks around the world, and most recently fans can wave “hello” to her in the Magic Happens parade at Disneyland. She is also getting a new attraction at Disney World.

Tiana, the only Disney Princess to ever work an hourly job, is perhaps one of the most independent and inspiring princesses out there. She does everything in her power to achieve her dream of opening up her own restaurant — Tiana’s Place — in honor of her late father. She “works really hard each and every day” and never takes no for answer, and through it all, she remains a great friend to Lottie, her childhood BFF.

Tiana also has her own float in the Magic Happens parade at Disneyland Resort. She is also getting her own restaurant, themed after Princess and the Frog, coming soon to Reflections – A Lakeside Disney Lodge at Walt Disney World Resort.  She also makes appearances at the Disney Parks worldwide.

Mulan saves all of China. What could be more admirable than that? She goes to war in place of her father in order to bring honor to her family, but in the end, she brings honor to her entire country. She is loyal to all, as brave as can be, and true to who she really is. Mulan isn’t the kind of person who needs someone else to save her, either. And because of the empowering message she

Mulan has been known to make appearances in the China pavilion at EPCOT as well as during Disney’s Lunar New Year celebrations at Disney California Adventure. You can also find her at Disney Parks around the world.

Though Rey is more of a contentious character than the three Disney Princesses listed above, there is no doubting her strength. She has overcome so much adversity in her life, battled internal struggles of identity and self-worth for years, and emerges at the end of the Skywalker Saga as strong as ever.

Kids and kids at heart love meeting Rey in Star Wars: Galaxy’s Edge at Disneyland park and at Disney’s Hollywood Studios park on both coasts.

The Disney Junior icon has a show with her namesake, and we love everything she stands for! She teaches us the importance of being smart, kind, and creative, and it’s clear that kids can’t get enough of her empowering messages. She also teaches critical thinking and problem-solving skills through each episode of her Disney Junior show.

Book a trip to the Disney Parks

Want to have great character interactions, meet amazing Disney Cast Members, and see heroes like Moana, Tiana, Mulan, and Rey in person? Book a trip to the Disney Parks!

The Disney Parks around the world — Disneyland Resort, Walt Disney World Resort, Disneyland Paris, Shanghai Disneyland, Hong Kong Disneyland, and Tokyo Disney Resort — host a variety of Disney characters in their shows, parades, meet-and-greets and more. Often, getting to experience a character interaction with your Disney role model can be a life-changing experience no matter your age.

Whether you want to visit Magic Kingdom to see Princess Tiana in the Festival of Fantasy parade, or you want to head over to California to see Rey at Star Wars: Galaxy’s Edge, you’re sure to have the time of your life meeting your heroes at the Disney Parks. Click here to book a trip with Academy Travel and have the vacation of your dreams at a Disney theme park.

Who do you think is the best role model to meet in the Disney Parks? Which character do you wish did more meet-and-greets? Let us know in the comments!