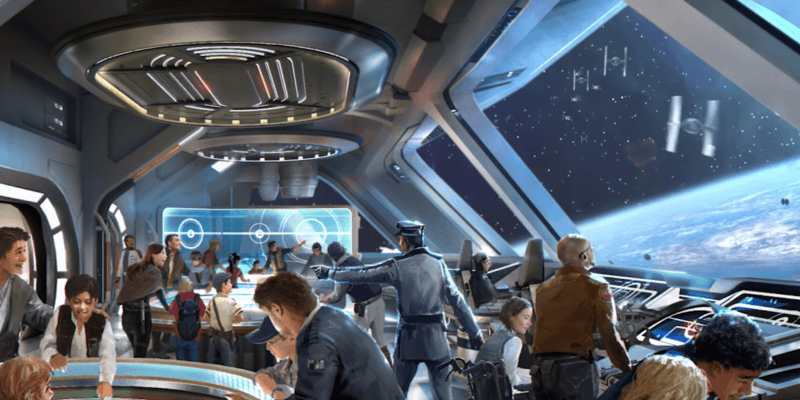 “For the first time, we are going to invite guests to become the heroes of their own Star Wars Adventure and you can do it in any way you’d like,” says Ann Morrow Johnson, executive producer for Walt Disney Imagineering.

You can watch this video to learn what you can expect:

This experience lasts two days and two nights onboard a galactic starcruiser. Arriving guests will go to a special terminal–like a small cruise terminal–be ushered into a launch pod. Inside this pod, you will simulate the experience of being blasted off into space. You will be flown to your ship, The Halcyon. The pod doors will open and you will be in the ship’s atrium.

Star Wars Immersion Level: 100. Everything and everyone is tasked with reinforcing the idea that you are in a space ship somewhere in a galaxy far far away.

“The cabins are unlike any place you stayed before. These are cabins of a starcruiser.” -Ann Morrow Johnson

The cabins aboard The Halcyon sleep up to five guests and yes includes an exclusive window that beholds a breathtaking outer space view.

As far as the activities go, adults and kids will have the chance to wield their own lightsaber and finally know what it’s like to go up against a Jedi training remote.

Guests will also be able to take tours of “The Bridge” and see all of the bells and whistles used to keep the beautiful ship sailing. But part of that bridge tour is a training exercise where you have to spring into action to defend The Halcyon against attackers.

“Back up. ‘Two days and two nights’? Can we leave the hotel?”

Yes, guests will be offered a chance to leave The Halcyon for an “excursion day” to the Black Spire Outpost of Batuu. According to Ann Morrow Johnson, guests will board exclusive transports and emerge in Star Wars: Galaxy’s Edge at Disney’s Hollywood Studios. This is designed to maintain the full-immersive experience of your cruise.

Now, what happens while your tour group is on Batuu–any unplanned run-ins with Kylo Ren and the First Order perhaps–has to be taken into account.

Either way, Star Wars: Galactic Starcruiser is proving to be more than just a Star Wars hotel. It is going to be an incredibly immersive experience and a Walt Disney World resort vacation all its own.

“If you’re a guest coming to Star Wars: Galactic Starcruiser,” Ann concluded. “You’re going to be a part of a story and live out your own Star Wars experience.”

Book Your Reservation with Academy Travel

Once it’s possible to book your reservations aboard The Halcyon, our friends at Academy Travel will be standing by at the ready. Backed with years of Disney vacation experience, Academy’s travel agents will be able to help you book your ultra-immersive Star Wars trip as soon as reservations are open.

What do you think of Star Wars: Galactic Starcruiser? Ready to write your own Star Wars story? Let us know in the comments!