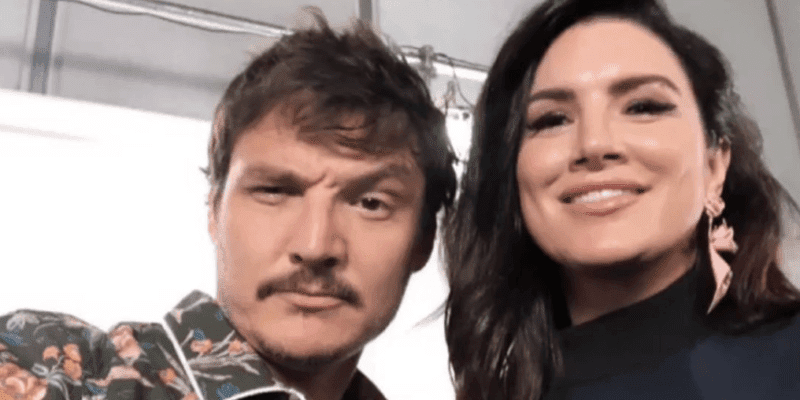 The Mandalorian has put Star Wars on the map in a way few movies or series have, at least in recent memory.

Showrunner Jon Favreau and executive producer Dave Filoni’s hit Disney+ series has taken viewers on a journey throughout the Outer Rim with Din Djarin (Games of Thrones actor Pedro Pascal) and Grogu (AKA The Child AKA Baby Yoda) — and a host of other characters, including fan-favorites like Bo-Katan Kryze (Katee Sackhoff), Boba Fett (Temuera Morrison), and Ahsoka Tano (Rosario Dawson) along the way.

Title actor Pedro Pascal got to display his acting chops more during Season 2 of the show, as the creative team deigned to allow him to remove his Mandalorian helmet in two episodes during his quest to save Grogu from Moff Gideon (Giancarlo Esposito) and the Imperial remnant.

As one might expect, the popularity of the Star Wars series has led the cast to receive a great deal of attention online. As a matter of fact, actress Gina Carano — who plays ex-mercenary and current New Republic Marshal Cara Dune — recently ranked as one of the world’s top stars on IMDb’s Top Star Meter tracker.

Pascal is still joined by Carano in Star Meter’s current rankings — she has fallen two spots to number four on the list. It is unsurprising to see that the sometimes controversial actress, known for her active Twitter account, is still quite popular, particularly after she spoke out about the Pablo Hidalgo controversy, in which the Lucasfilm executive mocked a fan’s reaction to The Mandalorian Season 2 finale episode (“Chapter 16: The Rescue”).

Mandalorian creator Jon Favreau has also joined his two cast members toward the top of Star Meter, rising 20 spots to the sixth position.

Pascal’s Wonder Woman 1984 — he played over-the-top character Max Lord — co-star Gal Gadot has also moved up 20 rankings, now holding the number five spot on Star Meter. This is likely due to the fact that the new Patty Jenkins-directed movie released in theaters and on HBO Max on Christmas Day, so it has been receiving a great deal of press.

Jenkins is also set to direct the next Star Wars feature film — Star Wars: Rogue Squadron (2023) — and Pascal has expressed that he would be involved if the storyline worked out in favor of Din Djarin making an appearance.

Next up for Pascal in the Star Wars universe? Filming The Mandalorian Season 3. The actor has confirmed that he will be back in his beskar armor — though there’s no word on a release date or on whether or not Grogu and Jedi Master Luke Skywalker (CGI Mark Hamill in the second season finale) will join him.

The first Mandalorian spinoff slated to release is The Book of Boba Fett — with Morrison reprising as his iconic bounty hunter character and Ming-Na Wen portraying Fennec Shand. Two other spinoff series, Ahsoka and Rangers of the New Republic, are expected to debut alongside the third season of The Mandalorian, likely in 2022.

What do you think about The Mandalorian’s Pedro Pascal ranking as IMDb’s most popular star of the moment?