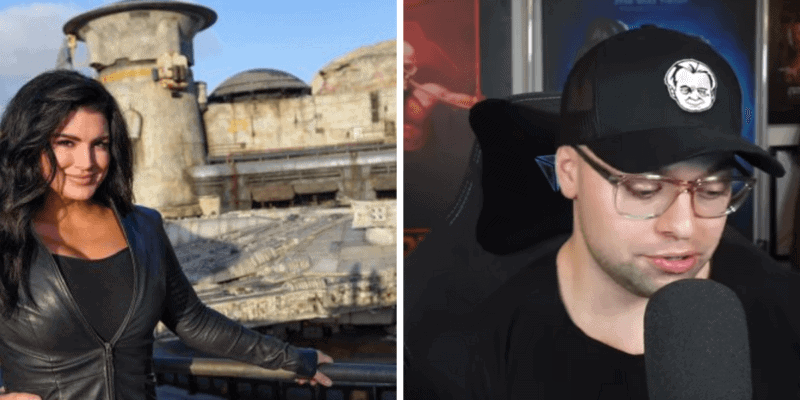 Recently, there was some controversy in the Star Wars community over some comments made by Lucasfilm’s Pablo Hidalgo towards a fan on Twitter. Gina Carano — who has dealt with her fair share of controversy regarding her own social media posts — spoke about the situation surrounding comments made by Hidalgo, and her response was shared on Twitter.

For context, Pablo Hidalgo who is a creative executive at Lucasfilm,Tweeted (and then deleted) a post in which he called out a popular Star Wars fan and YouTuber, Star Wars Theory. Hidalgo responded as a reaction to the emotions the fan expressed during a live watch-party of The Mandalorian Season 2 finale.

Though he has since changed his name on Twitter, his profile picture, and made his account private, before he did so, Hidalgo had made the controversial Tweet the banner of his Twitter profile, sparking more outrage from fans. Fans began calling for Hidalgo to issue an apology and for changes to be made at Lucasfilm.

Pablo chimes in to make fun. Deletes the tweet. Then puts one of them as his header. How is this acceptable from someone so high up at Lucasfilm? You're telling people it's not ok to have emotions about the work your company produces, and you make fun of them for crying? Not ok. pic.twitter.com/aIfU2SigIy

The particular scene that got Star Wars Theory host choked up was the return of Luke Skywalker in the finale episode of The Mandalorian Season 2, a scene that tugged at the heartstrings of what seems to be a majority of the show’s fans.

Gina Carano presented her thoughts on the return of Luke Skywalker and the emotions felt on set by the cast. She also shared how she knows fans could feel those powerful emotions through their screens, indicating that everyone should be allowed to feel however they want about Skywalker’s return.

Carano said that the magic of that moment (Luke Skywalker returning) was something that came from their (the cast’s) hearts and that “if you felt that, you felt the right thing.”

Despite Gina Carano’s controversies over her own Twitter page, she ranks as one of the biggest stars in the world right now.

Fellow Mandalorian cast members have spoken out in support of Gina Carano as her Twitter posts have divided fans with hashtags such as #FireGinaCarano and, on the flip side, #WeLoveCaraDune. Disney and Lucasfilm have not made any public statements regarding Gina Carano. However, Lucasfilm did reach out to Star Wars Theory to apologize for Pablo Hidalgo, according to statements made by Star Wars Theory via YouTube.

You can watch the full livestream during which Gina Carano discusses the Pablo Hidalgo situation below. Carano appears around the 34-minute mark:

What do you think about Gina speaking up about the Star Wars Theory vs. Pablo Hidalgo situation? Let us know in the comments!