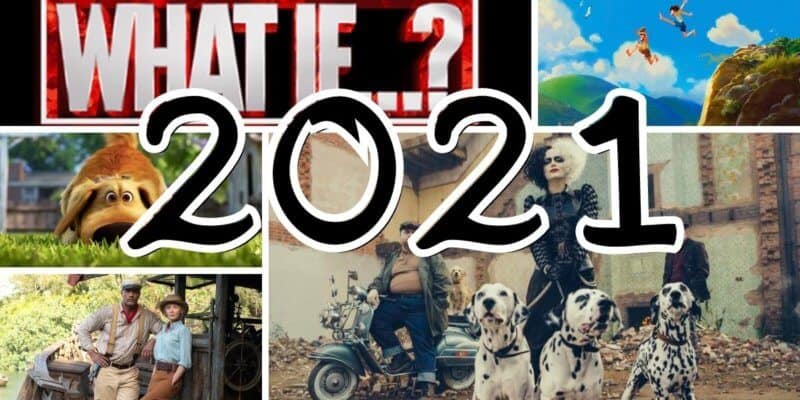 Out with the old and in with the new — 2020, despite not being able to release things as planned, still brought us various new Disney content including the live-action Mulan, Soul (being released to Disney+ on Christmas Day), The Mandalorian season two, and so much more.

But, it looks like 2021 is shaping up to be even better as Disney has just released their full official list of titles that we can look forward to in the New Year! From Marvel television shows coming to Disney+ to live-action Disney films set to hit theaters, fans are eagerly waiting for the New Year to come.

Here is a complete list of titles coming in 2021, along with their release dates and official descriptions.

WandaVision is an upcoming American streaming television miniseries created for Disney+ by Jac Schaeffer, based on the Marvel Comics characters Wanda Maximoff / Scarlet Witch and Vision. It is set in the Marvel Cinematic Universe (MCU), sharing continuity with the films of the franchise.

Pixar Popcorn is an upcoming Pixar short series set to premiere on Disney+.

An imaginative and creative 10-year old cynic never could have predicted that her little squirrel would be born anew as a superhero and have the uncanny knack for helping her and the lovable but broken people in her life.

Feature film adaptation of the musical about a teenager from Sheffield, England who wants to be a drag queen.

Raya and the Last Dragon — March 5, 2021 (Disney Animation/theatrical and Disney+ with premier access)

As a collection of history’s worst tyrants and criminal masterminds gather to plot a war to wipe out millions, one man must race against time to stop them. Discover the origins of the very first independent intelligence agency in The King’s Man. The Comic Book “The Secret Service” by Mark Millar and Dave Gibbons.

The further adventures of hamburger restaurateur Bob Belcher and his quirky family.

A 11-year-old boy finds out that his robot buddy doesn’t quite work and goes to a world where walking, talking, digitally connected robots have best friends for children.

A bank teller who discovers he is actually a background player in an open-world video game, decides to become the hero of his own story…one he rewrites himself. Now in a world where there are no limits, he is determined to be the guy who saves his world his way… before it is too late.

Cruella is an upcoming American live-action film which will be distributed by Walt Disney Pictures. Based on the 1961 Disney animated feature film, 101 Dalmatians, the film serves as an origin story of Cruella De Vil.

Loki is an upcoming American streaming television miniseries created for Disney+ by Michael Waldron, based on the Marvel Comics character of the same name. It is set in the Marvel Cinematic Universe, sharing continuity with the films of the franchise.

Set in a beautiful seaside town on the Italian Riviera, Disney and Pixar’s original feature film “Luca” is a coming-of-age story about one young boy experiencing an unforgettable summer filled with gelato, pasta and endless scooter rides. Luca shares these adventures with his newfound best friend, but all the fun is threatened by a deeply-held secret: they are sea monsters from another world just below the water’s surface.

Shang Chi and the Legend of the Ten Rings — July 9, 2021 (Marvel Studios/theatrical)

The original Marvel Comics Shang-Chi follows Shang, a half-Chinese, half-American superhero created by writer Steve Englehart and artist Jim Starlin. In the comics, Shang-Chi is a master of numerous unarmed and weaponry-based wushu styles, including the use of the gun, nunchaku, and jian. Shang-Chi first appeared in Special Marvel Edition #15 in 1973.

Join fan favorites Dwayne Johnson and Emily Blunt for the adventure of a lifetime on Disney’s JUNGLE CRUISE, a rollicking thrill-ride down the Amazon with wisecracking skipper Frank Wolff and intrepid researcher Dr. Lily Houghton. Lily travels from London, England to the Amazon jungle and enlists Frank’s questionable services to guide her downriver on La Quila—his ramshackle-but-charming boat. Lily is determined to uncover an ancient tree with unparalleled healing abilities—possessing the power to change the future of medicine. Thrust on this epic quest together, the unlikely duo encounters innumerable dangers and supernatural forces, all lurking in the deceptive beauty of the lush rainforest. But as the secrets of the lost tree unfold, the stakes reach even higher for Lily and Frank and their fate—and mankind’s—hangs in the balance. Jaume Collet-Serra directs the film, which stars Dwayne Johnson, Emily Blunt, Edgar Ramirez and Jack Whitehall, with Jesse Plemons, and Paul Giamatti. John Davis, John Fox, Dwayne Johnson, Hiram Garcia, Dany Garcia and Beau Flynn are the producers, with Scott Sheldon and Doug Merrifield serving as executive producers. The story is by Glenn Ficarra & John Requa and Michael Green, and the screenplay is by Glenn Ficarra & John Requa.

A well-to-do husband who allows his wife to have affairs in order to avoid a divorce becomes a prime suspect in the disappearance of her lovers.

Filmmaker Peter Jackson presents restored, never-before-seen footage of the Beatles during their recording sessions of the album “Let It Be.”

What If…? is an upcoming animated American web television series based on the Marvel Comics series of the same name.

The series will focus on Dug and Carl as they reside in Suburbia.

Detective Hercule Poirot investigates the murder of a young heiress aboard a cruise ship on the Nile River.

A woman claims she’s been raped by her husband’s best friend, Jean de Carrouges. But when no one believes her accusation, her husband challenges his friend to a duel, the last legally sanctioned duel in the country’s history.

Encanto will center on a Colombian girl who, in spite of coming from a magical family, lacks magical powers

The movie will see the return of the comical Egyptian villain from Night At The Museum: Battle of the Smithsonian, Kahmunrah (played by Hank Azaria). Other characters returning for the Disney+ movie include the loveable cowboy Jedediah (played by Owen Wilson), the Roman Legionnaire, who banters with Jedediah, Octavius (played by Steve Coogan), the 26th President, and who will become Nicks supporter Teddy (played by Robin Williams), famous Native American, and Sacagawea (played by Mizou Peck). Also joining the adventure is French heroine Joan of Arc, who joins the group and helps build Nick’s confidence.

The Book of Boba Fett is an upcoming American streaming television series created for Disney+. It is a spin-off from the Star Wars streaming series The Mandalorian featuring the bounty hunter Boba Fett. The series is produced by Lucasfilm, and exists alongside Ahsoka and Rangers of the New Republic

Star Wars: The Bad Batch is an upcoming animated Star Wars series that acts as both a sequel and spin-off to Star Wars: The Clone Wars. The series will debut on Disney+ in 2021.

What are you looking forward to most in 2021? Let us know in the comments below.

Comments Off on A Complete List of New Disney Titles Coming in 2021!