Will the Jungle Cruise Movie Live Up to its Namesake Attraction? Sass Abounds In The New Trailer - Inside the Magic 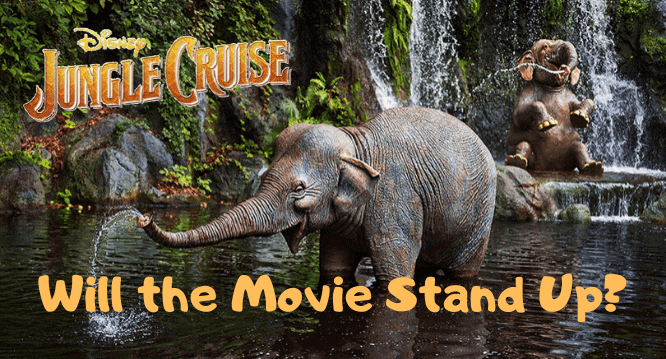 It’s our favorite attraction mixed with a wave of Pirates of the Caribbean, a splash of Jumanji and perhaps even a drop of Indiana Jones. The Jungle Cruise movie is shaping up to be a very exciting blockbuster that we at Inside The Magic are really excited to see! As much as Parks Fans love the classic attraction, some are worried that the movie will fall flat (see Eddie Murphy’s Haunted Mansion) and others are sure that it will resonate for a full series of films like Pirates of the Caribbean.

The Jungle Cruise opened first in Disneyland on July 17, 1955, and has been running ever since. That’s so many trips down the Amazon we can’t count them all. It means a lot of time for Guests to ride, look, listen and fall in love. Will the new movie be able to capture us the way Walt Disney’s original theme park attraction did?

Are you ready for some real adventure? I’ve not been so excited to see a Disney adventure film since the original Pirates of the Caribbean was released! This Inside the Magic editor had the GREAT PLEASURE to be an extra in the Jungle Cruise movie, but I won’t tell you when or where or ANYTHING about the movie… you’ll have to join me in the theatres on July 24, 2020!

According to Wikipedia, the Jungle Cruise movie is set during the early 20th century upon a riverboat. Captain Frank takes a scientist (played by Emily Blunt) and her brother on a mission into the Amazon to find the Tree of Life which is believed to possess healing powers. All the while, the trio must fight against dangerous wild animals and a competing German expedition.

It’s truly an adventure movie, but we are finally able to see via the new trailer the level of sass and humor that flows through the film. Dwayne Johnson’s easy delivery of snide, humor, and charm seeps into his character. Emily Blunt is often playing the straight man but has her chance at a giggle or two. Humor is a big part of the way the Jungle Cruise Expedition is run. Puns are king, and this is evident even in the Jungle Skipper Canteen menu that we’re so fond of. Adventure, Humor, and a touch of magic. We think it’s going to be a success, and we’re really excited to see the film!

Join the adventure of a lifetime and watch the action-packed new trailer for Disney’s JUNGLE CRUISE. The trailer was launched via a fun-filled Instagram Live featuring Dwayne Johnson, interacting with a boat full of skippers from the Jungle Cruise attraction at The Disneyland Resort. Inspired by the famous Disneyland theme park ride, Disney’s JUNGLE CRUISE is an adventure-filled, Amazon-jungle expedition starring Dwayne Johnson as the charismatic riverboat captain and Emily Blunt as a determined explorer on a research mission. Also starring in the film are Edgar Ramirez, Jack Whitehall, with Jesse Plemons, and Paul Giamatti. Jaume Collet-Serra is the director and John Davis, John Fox, Dwayne Johnson, Hiram Garcia, Dany Garcia and Beau Flynn are the producers, with Doug Merrifield serving as executive producer. Disney’s JUNGLE CRUISE opens in U.S. theaters on July 24, 2020.

Walt Disney World’s Magic Kingdom made headlines last week when a Jungle Cruise skipper’s boat took on water in the middle of its ride. Walt Disney World remained calm as the situation was handled carefully and quickly. The formal statement read,

“A boat took on some water. Reedy Creek Fire Department responded immediately to this event. Everyone got out of the boat safely. We worked with guests individually so that they could enjoy the rest of their day in the park. The attraction has reopened.”

The attraction reopened to Guests within two hours and has continued to run with this only incident in the attractions years-long history. “We hope that this news does not alter your opinion of one of the most beloved Disney attractions of all time and deter you from enjoying it on future Walt Disney World vacations.” – ITM reporter TJ Muscaro.  Although it was handled well and quickly, twitter fans couldn’t help but joke that this unpleasant event was secretly gorilla marketing for the upcoming Jungle Cruise movie.

The Jungle Cruise Board Game

Parks Fans that still pine to become skippers may take the upcoming Jungle Cruise Board Game super seriously and compete to see who can brave a dangerous river while picking up supplies and passengers. (This is sounding an awful lot like the Jungle Cruise Movie plot!) Players will have to decipher clues to see which player will lead the Jungle Exploration Company originally founded by Alberta Falls (I’m sure she’s a member of S.E.A!). I have a feeling I’ll be collecting this game right before I see the film in order to stand the wait!

Will you catch a trip down the river with the Jungle Cruise film? Do you think it will hold up to its namesake attraction? Leave us a comment below?